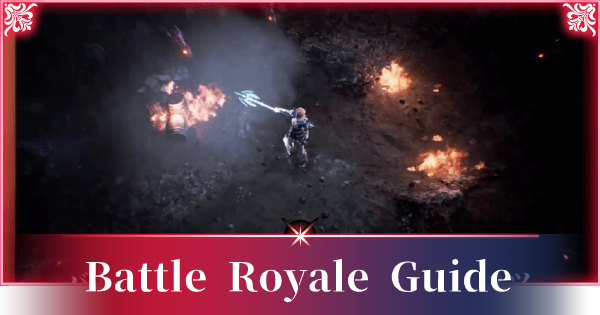 Battle Royales have two modes in STILL ALIVE. The first is the regular Battle Royale, which will also include some AI characters in the fight. The second is Team Battle Royale, in which players will form groups and compete against each other. If you're in a hurry and want to get your BR done fast, choose the regular mode!

Fight To Be The Last One Standing

In Battle Royale, you'll be fighting against both real players and AI to be the last one standing. Only one person can come out on top in this mode! Importantly, you'll be using special moves and abilities exclusive to this mode.

Your Stats And Equipment Aren't Used

Battle Royale mode will not bring over your character's usual stats, equipment, or Soul Linkers! Instead, you will have to choose what specialized Battle-Royale only weapons and skills you bring to each fight! This means you will be on a more or less even playing field with others.

Rewards for this mode will be determined according to seasons, which will reset after a certain amount of time passes. If there's a particular reward you want from the Battle Pass or Battle Shop, make sure you get it before it goes away!

In order to win at the Battle Royale mode, you will have to be the last person standing in the match! You'll have to overcome many other players and AI to successfully win this mode.

After matchmaking ends, your characters level and weapon level will be set to 1. You'll start with no other skills or items in your possession and will have to work your way up from the bottom alongside everyone else!

When the battle starts, you will be limited in what parts of the map you can go to. New sectors of the map will unlock over time, so make sure you get to the next area within the time limit! Failure to do so will cause you to take massive damage!

Battle Royale mode will begin with you having the option to choose from a series of weapons. The weapons will each have a different range and abilities, so make sure you thoroughly understand them all before making your decision.

Enemies in Battle Royale will drop one of 3 varieties of equippable gear, as well as consumable items. You can hold up to two items at a time and use them by simply tapping on them!

Your main goal in Sector 1 will be to kill enemies, pick up Enhancement Stones and level up your character. If you see a Supply Chest enemy (Mimic) on the map, prioritize taking it out! When the alert for the next sector comes up, make your way over there while taking out any Mimics that might be nearby.

In places on the map marked with an Eye, you'll find structures called Inith's Torch. You can take over these by standing near them and tapping the button that pops up. Your HP will gradually recover if you stand in an area that you are currently occupying, making these important strategic locations. Continue your Mimic hunting strategy for this zone as well to get more equipment and consumables.

In this area, there will be fewer Inith's Torch structures. What's more, enemies will be significantly bulkier and harder to take out. Try to focus on capturing a Light and fighting in its vicinity whenever possible!

This final area will be an all out free battle with your remaining foes - there are no obstacles or enemies to get in your way. All that's left here is for you to use the skills and items you acquired over the run effectively to take out your enemies. Remember to use not only your special skills, but also your basic attacks as much as possible!

Flooded Metium is the newest mode in Battle Royale, added during the January 14th Update. It is separated into three sectors. As the time limit draws nearer, sector gates will NOT close, but if you remain in those sectors your HP will start to go down quickly. You'll have to head to the 3rd sector to battle it out with all the other survivors to win.

The fastest way to get through the first phase is to defeat half of the players in your current area! First you'll want to get skills and defeat monsters, collecting weapon enhancement stones and items. Look for players with low HP and take them out.

Enemies in this sector will be more powerful, but will also provide more EXP. This is the only sector where Supply Chests will spawn, so while it is a good idea to go after them, you'll have to really be careful about other players doing the same. If you spot a big level discrepancy between you and other players, keep away from them and focus on monsters first.

There are no monsters or other terrain obstacles here - all that's left is to fight it out to the very end. You'll need to use your skills and items wisely in this last leg if you want to come out on top. Remember not to just spam abilities, position yourself carefully and use basic attacks!

The rewards you get from Battle Royale do in fact change according to your final rank in the match. Make sure to spend all the Hayren's Essences you acquired at the Battle Royale Shop later as well!

※ The following are Rewards displayed when playing a Berserker.