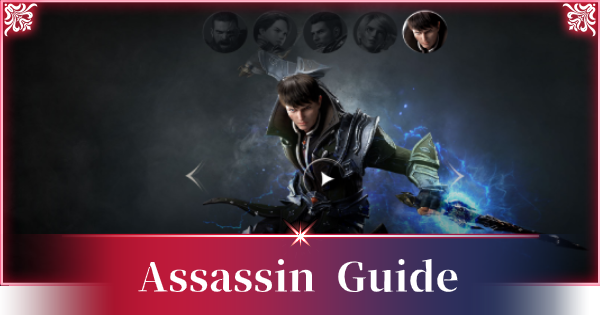 Attacker Adept At Closing The Distance

The Assassin is an agile and mobile attacker that can send himself flying towards enemies. He is capable of freely manipulating the space between opponents and confusing them, all while dealing great damage!

Certain abilities will make the Assassin unstoppable/invulnerable while he is doing them! This means that you can use these to dodge important enemy abilities. Using Into the Veil will also let you stealth and get the jump on unsuspecting players!

Buff Yourself With Lethal Preparation

The passive skill Lethal Preparation clouds your weapon in a black fog, boosting your own offensive stats for 15 seconds. Smart use of this can let you deal huge burst damage on a foe!

The Assassin's skill Shadow Escape sucks enemies into an area and deals damage to them. This is an excellent way to group up enemies and hit them with your other powerful AoE abilities. This is also excellent when playing in a team with other people.

Buff yourself with Lethal Preparation, pull lots of enemies and group them up using Shadow Escape. You can also use Track Prey and Sneak Attack to bring in other nearby enemies into the fight. Instant Assasination is also recommended here, as its cooldown is relatively short.

Throw Double Blade decreases movement speed and is very useful in PvP Combat! Into the Veil will also let you stealth and get the jump on your enemy, so it's practically a must. Generally aim for a hit-and-run strategy when playing the Assassin in PvP! Get in quick, hit hard, and get out!

The Assassin works best when buffing up its Critical stat, given that it attacks so fast. Pick a Soul Linker that gives you a crit bonus for the best effects.

It's generally not worth it to prioritize building up defensive stats on an Assassin. Enhance your damage-dealing passives first to maximize your damage output! If you want some defenses, focus on evasion instead.

Great content, but most of this stuff can be found in-game already, was hoping more to find tips and tricks for ******in since I am lvl 110 Apostle 11.