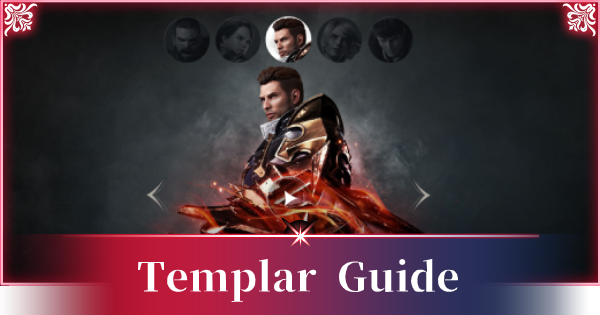 The Templar is a character which buffs itself and allies, all while pulling in enemies and taking hits from them. Its strong defenses make it perfect for group content, as it can tank for allies while controlling groups of enemies.

A Variety Of Stun Skills For PvP

Skills like Wings of Revenge and Divine Punishment are excellent for PvP, as they'll stun your opponents! The templar does have the drawback of being relatively slow, however, so you'll have to use its crowd control abilities to successfully maneuver your way around a PvP battlefield.

Use Rallying Cry Before Combos

Rallying Cry is a buff skill that applies not only to you but to your allies as well! When playing solo you're safe to use this on cooldown, but if you're in a party, try to sync the skill with your party member's abilities as well!

Round Up Enemies With Condemn

Although the Templar's skills are usually somewhat slow to cast, Condemn is an exception! It is an AoE skill which is very easy to get off, gathering up enemies in front of the Templar and binding them!

Wings of Redemption restores the HP of allies and clears them of debuffs (and also provides temporary immunity to them). This makes the Templar an absolutely essential support character in group content, but it also has applications in solo PvE as well!

Condemn is a must for PvE content, as it will help you group enemies up together. Unyielding Unit and Domain of the Punisher are also good options to have, as you'll want to ensure you have enough offensive skills to take out enemies when playing solo. If you're playing a group, make sure to take Wings of Redemption!

Ironclad is an extremely useful ability for PvP, so make sure to always have it. Your primary job will be to disrupt enemies, so make sure to pick up Wings of Revenge and Divine Punishment to stun foes!

The Templar is most useful when using its myriad powerful skills to help allies. You'll want to prioritize Cooldown Reduction, and Soul Linker bonuses are a good way to do this!

Recommended Passive Skills To Level Up

The Templar is primarily meant to be a tank character, so his defenses are important. Focus on raising up your HP first, and then try to boost up your Magical DEF stat.

I decided to roll the Templar first. Thanks for the guide!