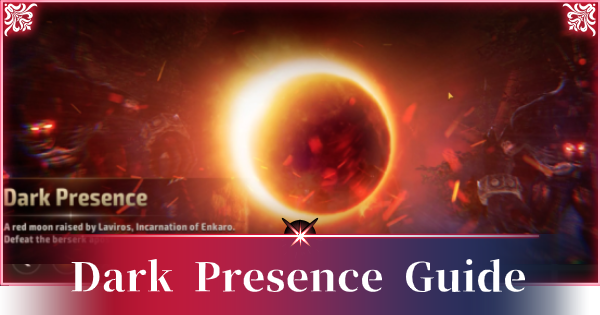 Check out our Dark Presence Guide for A3: STILL ALIVE. Find out how to unlock, PvP strategies, rewards, rules of the mode, participation point rewards, tips & more!

Opens Up At Specific Times Of The Day

Dark Presences will occur twice daily, each held for 10 minutes total. A message will appear 1 minute before the event begins and you'll be able to join in. It's recommended to reserve a spot here, as it's possible to miss the timer and be unable to play the mode.

Separate Into Teams And PvP

All players that join a Dark Presence will be split up into two teams and will have the mission of defeating the other team's players as many times as possible to earn the most points. This is fundamentally a PvP mode! Your allies will be blue and enemies will appear red.

Use Your Real Equipment & Stats

Dark Presence is a PvP mode where your character's gear, progression, and power are all carried over! This means that you can fight against players with your true power and aim for the top of the rankings.

Ranking Rewards Are Given Per Profession

You will given specific rankings for your profession. This means that professions such as Templar, which might not be able to do immense damage, will still be able to get rewards! You'll be competing with other players of your class!

Get A Team Bonus For Winning

The team that wins the overall battle will get additional rewards. The winner is determined by adding up the total points gained by players on that team!

In addition to victory and ranking rewards, you'll also get special participation points for the amount of time you spend in Dark Presences. You'll be given one point for every minute! The event lasts 10 minutes, so you'll want to be there from the start.

The Team With More Points Wins

When the match ends, the total points accumulated by all players on your team will determine who wins. These points can be earned by battling players, killing players, as well as by killing monsters.

Revive If You Die

Even if you are taken out by an enemy player or monsters, don't worry - you will revive automatically after a few seconds. Your respawn location will be random, however.

Points can be obtained not only from players, but from non-player monsters as well! If you can't find players nearby, try killing monsters instead.

Get Bonus Monsters Too

There are also special monsters which provide a larger than usual amount of points when defeated. You will get a notification in the top part of your map when such a monster appears on the screen! It's likely that other players will also approach this monster, so be careful!

Adjust Your Skills Before Entering

You won't be able to change skills once you enter the Dark Presence, so make sure you adjust your skills before starting! Remember that certain skills are more suited for PvP combat than others, so choose wisely!

Check Out Our Professions Guide For More Info On Skills Here

The more allies you have with you, the easier of a time you'll likely have. Blue marks on your map indicate the position of allies, so head towards them! The enemy team can do this as well, so make sure to think twice before fighting groups of enemies alone.

Stuns are a good to ensure a kill on an enemy. If an enemy is moving alone, try to isolate and stun them. If you're traveling in a group this will work even better, so make sure to set skills which can crowd control enemies!

Note that Dark Presence rewards received some changes and additions in the January 14th Update. You will now get more points during the activity, and you can get ★6 Heroic Soulstars from the event as well.