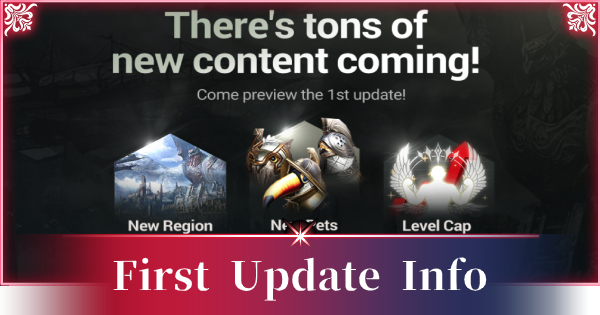 Check out information on the first update in A3: STILL ALIVE coming November 30th. Find out all the new features and content, release date, new zone, level cap increase, & more!

A3: STILL ALIVE's first official update has been announced! It will be going live on Monday, November 30th, 2020. We've compiled all the details below, so read on for more info!

Check Out More Info On The Official Page Here

The new area of Metium has been added to the game! Here you'll be able to access new story missions and the new dungeon S.S. Ivan's Conquest.

The spooky S.S. Ivan's Conquest will also be open for players to access. This zone will not feature PvP content, making it a nice and safe place to farm items. It will have lower drop rates than the above mentioned War Zone, but it will still be worth doing!

The new War Zone Dungeon Field Fl. 2 will also be added in this patch. You'll be able to Legendary tier equipment here, so this will no doubt be a place you'll want to farm for gear!

In the upcoming update, the new region of Metium will be added, and alongside it the level cap will be raised from 100 to 120! New monsters and quests will await you in this new zone, so there'll be plenty of opportunity to power up your character!

The new guild content Resource Battle is also scheduled to be added to the game! In this mode, you'll face off against other guilds to compete for resources! Take resources from the enemy and pile up your own to be the winner!

One On One Duels

Plant a flag in front of your opponent and engage in a one on one duel! This new system will let you have friendly battles with other players in town!

A new form of ranking has been added to the game - this time you can test your mettle with other players in PvP to compete for the highest spots! Getting a high rank will give you a special critical rate up buff too!

The adventure Shiland Mine has a newly added difficulty - Hell! You'll need to reach character level 110 to unlock this, so start leveling!

Check Out Our Shiland Mine Guide Here

New level 120 Passive Skills were also added to the game. These will be separated into Physical and Magical categories, depending on the profession you're currently playing!

The maximum level for equipment has increased from 30 to 35! Alongside this, a Rare enhancement stone has been added. This will be necessary to get your items to those 5 new levels.

Metius, the Mighty Bird of Metium, will also be making its way to A3 in this next patch. Successfully bringing down this monster will give you a chance to get Ancient rarity equipment, so you won't want to miss it!

An entirely new system, the 'Shu' are birds you can get for yourself which will raise up your Combat Power!

Check Out Our Shu Guide Here

This November update was the 1st major content update the game saw. Check out the articles below to see what was added in later patches!