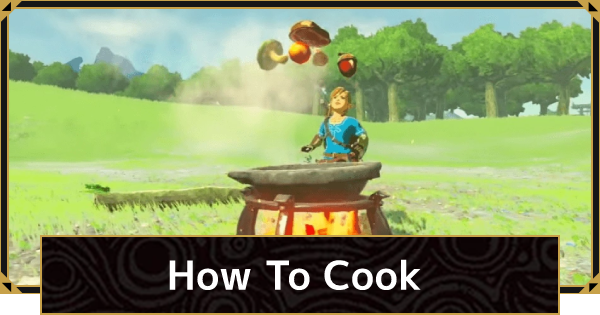 How to cook guide for Zelda Breath of the Wild (BotW). Learn how to cook food, know locations where you can cook, types of Food Effects, and tips to guarantee Critical Success.

Basics of How To Cook

Mix Ingredients To Make A Dish

Cooking can be created by throwing ingredients into a pot together. Basically, the same things that we eat as food in the real world can be used as cooking ingredients.

Insects And Monster Parts Can Be Used To Create Elixirs

In Hyrule, it is possible to collect and cook materials that most people would not eat, such as insects and lizards. When combined with monster parts, they can become elixirs with special effects.

If you do not follow the combinations above, the dish will fail. Link can get a small amount of recovery effect even if he eats it, but it won't have the original effect.

The maximum slots of food in your inventory is fixed, and you can only have a maximum of 60 from the beginning to the end. It is a waste to fill the slots with Dubious Foods, so it is better to eat them quickly.

No Way To Cook Multiple Foods At Once

There is no way to make multiple foods at once. Even if you have decided what you want to make, there is no other way but to create them manually one by one.

Some cooking ingredients, such as Raw Meat, can be transformed into heat-resistant Icy Meat by leaving them on a snowy mountain for a certain time. Simple cooking, such as this, can be created all at once because all you have to do is to leave it at a specific place.

Where To Cook Food

▲There is also a pot in the Forest of Spirits, not far from the Shrine of Resurrection. But there are several Bokoblins along the way and you need to bring a fire.

▲There is another pot in front of an old man's hut near the Owa Daim Shrine. In the early stage, here is the first easy spot to cook.

Simple Cooking Is Possible With Only A Bonfire

Some ingredients can be cooked just by placing them on a bonfire. A great example is if you put an apple on the fire, it will become a baked apple after a certain amount of time.

It Can't Be Done Without A Fire

Naturally, fire is essential for cooking. If there is no fire under the pot, light it first and make preparations. Also, any way to light a fire is fine. Fire Arrows, flaming swords, flints, or even fires caused by lightning strikes can be carried by a Torch.

Rain Will Extinguish The fire.

Most cooking areas, such as horse stables and campsites, are usually under skies, and cooking is not possible on rainy days because fires cannot be lit. In such case, you should try to use a covered cooking area in the village or town.

▲ A covered cooking area at Kakariko Village. Cooking can be done even on rainy days if the area has a roof.

Effects of Foods And Elixirs

Only One Effect Per Food

Only one special effect can be given to each ingredient, such as the effect of recovering from the Stamella Shrooms. If you combine multiple ingredients, they will cancel each other out and become a normal dish.

Originally, only using Razorclaw Crab (or Ironshell Crab) can make Mighty (Tough) Crab Omelet with Rice, but the effect disappears when both are added.

How To Guarantee Critical Success

Almost all cookings will be critical success on Red Moon Day. You can obtain foods with good effects by preparing a large amount of ingredients then cooking them at once on Red Moon Day.

The Music Changes When Critical Success Is Achieved

Introduces hidden effects of cooking ingredients that do not have special effects. When making Hasty, Mighty, or Tough Foods, use the following as a guide to check which ingredients to add.