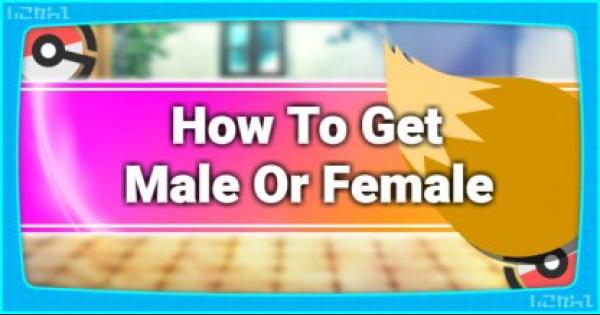 Pokemon Let's Go
How To Get Male / Female Pikachu / Eevee

Read this Pokemon Let's Go Pikachu / Eevee guide and walkthrough on how to get a male or female Pikachu or Eevee!

Check Out Differences In Pikachu & Eevee!

How To Tell Pikachu / Eevee Gender

The easiest & most simple way to check a Pikachu or Eevee's gender is through their tail. If their tail has straight lines, it's male, if it's curved, then it's female.

A male Eevee's tail will have jagged lines separate the darker brown with the yellow-brown part.

A female Eevee will have softer, curved lines separating the hues of brown on its tail. From an angle, it looks like a heart shape.

A female Pikachu's tail will be curved at the end. It look like a the top half of a heart.

How To Get Male Or Female

You can determine the gender of your partner Pokemon the moment you start the game. During the cutscene with the TV, when their tail pops up, you can already see their gender.

If you don't like the gender of your Pokemon, you can easily press the "Home" button, close the software, and start the game again.

Difference Between Male Or Female

No Known Difference Between Male Or Female

There is no known difference between a male or female partner Pokemon except the physical shape/image of their tails.