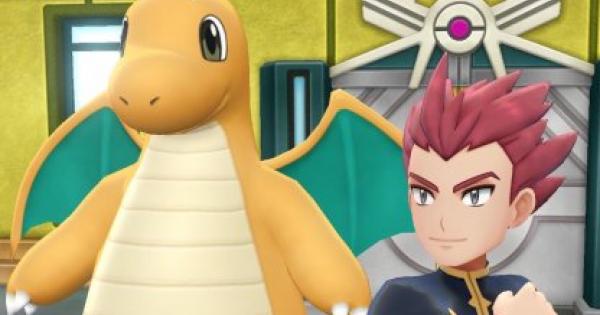 Find out how to beat the Lance (Elite Four) in Pokemon Let's Go Pikachu / Eevee in this guide! Learn traits of the trainer's Pokemon, how to counter, and play tips.

Party Based on Dragon Type Pokemons

The Elite Four, Lance's Pokemon consists of mostly Dragon Type. These Pokemons deals extremely high damage, regardless of your Pokemon's type. Be sure to level up and come prepared prior to this fight.

Lance will bring in an Alola Exeggutor when you fight him again. This Pokemon is four times weaker to Ice, like his other Dragon Pokemon, so make sure to barrage him with Ice Type attacks!

In this battle, Lance's Charizard will evolve into Mega Charizard X. It changes weakness & Type (from Fire / Flying to Fire / Dragon) so use this to your advantage!

Try using Ground and Dragon moves to counter Mega Charlizard X when it Mega-evolves. Take note that Mega Charizard X's weakness will NOT be Ice, unlike the original Charlizard,

When you face Lance once more, his Pokemon will have gained 10 more levels. Make sure your Pokemon are at the same level or higher to stand a fighting chance against Lance's Dragon Types.

Lance's first three Pokemon - Seadra, Aerodactyl, and Gyarados - are all weak against Electric Type Pokemon. Start the battle with a strong Jolteon or your powered up partner Pokemon Pikachu.

Since majority of Lance's Pokemons are Dragon type, using an Ice move on them will deal substantial damage. Using Pokemons such as Articuno and Lapras is highly recommended when facing him.

Pikachu will be an effective ally in this battle and though Eevee has an Electric Type move, if not leveled properly, it may not dish out the same damage Pikachu does.

Use Pokemon with Electric Move As Your First Pokemon

Using a Pokemon with an Electric move as your first batter-up is highly recommended as Lance's first three Pokemon are weak to this type.

Take Enemies Down Before They Use Hyper Beam

Many Pokemon in Lance's party has the ability to use the powerful Hyper Beam move. This powerful move may be able to wipe out your entire party when used in conjunction. Take your enemies out with Ice & Electric moves before they get a chance.

The final member of the Elite Four, Lance has powerful Dragon Type Pokemon!

Check Out How to Beat Champion