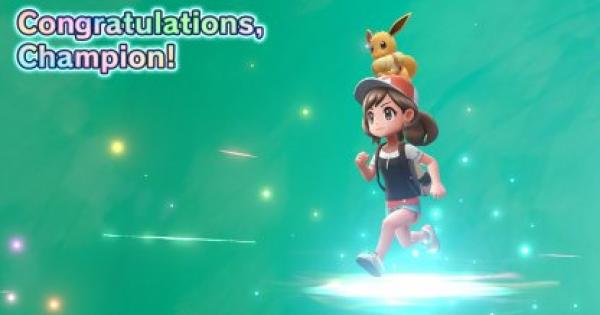 Pokemon Let's Go
What To Do After Beating The Game

After you've beaten the Pokemon League, certain flying Pokemon can fly higher! You can now fly over fences and buildings with Aerodactyl, Charizard, and Dragonite.

Master Trainers have spent their Trainer careers to raise a single type of Pokemon. Take them on in a 1v1 battle using the same Pokemon and earn their title when you beat them!

The ultra-powerful legendary Pokemon Mewtwo will be yours for the taking after you become Pokemon League Champion. Head to Cerulean Cave & battle it out with this legendary to capture it!

Check Out How To Catch Mewtwo!

Wild Snorlax Can Be Found

You can find wild Snorlax in Cerulean Cave! Be sure to bring Berries & Ultra Balls to capture this giant Pokemon!

Chansey spawns more often in the Cerulean Cave. This is the best place to farm & combo capture Chansey for massive amounts of exp.

You can pick up a bunch of good value items from the floors of Cerulean Cave. This is one way to find the highly elusive Master Ball in this game.

Catch Legendary Birds in the Wild

You can also try and catch the legendary Pokemon in the wild, other than set locations in Kanto Region. They have an extremely rare chance of spawning in any random area only after you beat the game.

Check Out How To Catch Legendary Pokemon!

You can search for Green once you've made Pokemon League Champion & captured Mewtwo in Celadon Cave. She'll give you his Mega Stones, Mewtwonite X & Mewtwonite Y, as a reward for beating her.

How To Meet & Beat Green

How To Meet & Beat Blue

How To Meet & Beat Red

You'll get Mewtwo's Mega Stones, Mewtwonite X & Mewtwonite Y, when you beat Green the first time at Cerulean Cove You need this to Mega Evolve Mewtwo during combat.

Other Mega Stones in Victory Road

You can purchase other Mega Stones from the Slowbro suit-wearing man found at the Pokemon Center in Indigo Plateau. Each Mega Stone costs 30,000.

Check Out All Mega Evolutions Here!

Fight Against Gym Leaders Once More!

You can face the gym leaders once again after you've won the Pokemon League! They'll still be at the same gyms where you last fought them.

The fight won't be the same and gym leaders will have more powerful Pokemon at a higher level, with stronger moves!

You can fight against the Elite Four and former Pokemon League Champion again after you beat the game. You can still find them at Indigo Plateau.

The Elite Four & Rival will have Pokemon that are at a higher level (+10). The Elite Four will also have Alolan Pokemon in their roster.

You can power up your Lv.100 Pokemon at the Pokemon Day Care Center at Route 5. You need to give him a "Bottle Cap" or the rare "Gold Bottle Cap" to activate this special training session for your Pokemon.

Check out How To Hyper Train In Pokemon Day Care

Battle Other Trainers from Story Again

You can meet Jesse & James in Route 17 after you've beaten the game. Talking to them will let you challenge them into a Pokemon battle once more!

You can get the Jesse & James Team Rocket outfit when you defeat them in Route 17. Be sure to answer "Well..." when they ask you to join Team Rocket!

Go back to Vermilion City & visit the port area to find Mina. You can challenge her once a day to receive a Bottle Cap - a special item that maxes out the IV of one stat of your chosen Pokemon.

Check Out How To Beat Mina!

You'll be able to challenge Coach Trainer Morimoto in Celadon City Condominiums after you beat the game. He'll give you 10 PP Maxes as a reward.

Check Out How To Beat Coach Trainer Morimoto!

Check Out How To Beat Archer!

Check out How To Remember Forgotten Moves

but what pokemon does he has? thats the real question!

You can rematch legendary Pokemon

There's also the coach trainer that blocks Mewtwo's cave until your champion. You cant fight him until you become champion and he moves