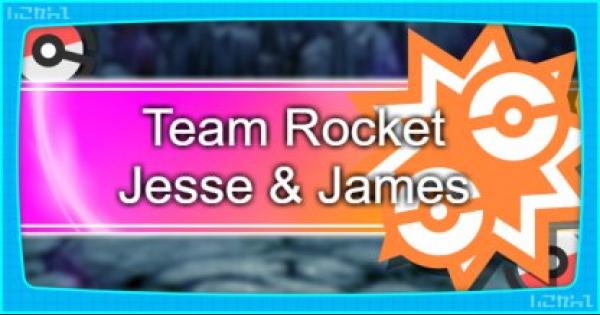 Meet The Popular Villains From The Anime!

The dynamic villainous duo from the Pokemon anime series is making their debut in Pokemon Let's Go Pikachu / Eevee! Face off with Jesse & James and prevent Team Rocket's evil plans!

Face Off Against Team Rocket

You'll most likely battle Jesse & James in-game using the Tag Battle or 2 v 2 Match. Watch out for them as they may appear several times throughout your journey!

Where Can You Find Jesse & James?

A Most Likely Encounter In Mt. Moon

After defeating Jesse & James in Silph Co., you can find them overlooking the ocean in Pokemon Road or Route 17.

Check Out How To Fight Jesse & James Again!

Get Blast-Off Set After Defeating Them

You can challenge them again and when you defeat them, you'll receive the Blast-Off Set.

Jesse & James will be using their iconic Pokemon, Koffing & Ekans, in this game so beware of their attacks with status effects. Meowth will also probably make an appearance!

As you progress through the story and encounter Jesse & James yet again, their Koffing & Ekans will most likely evolve into their more powerful evolutions - Weezing & Arbok!