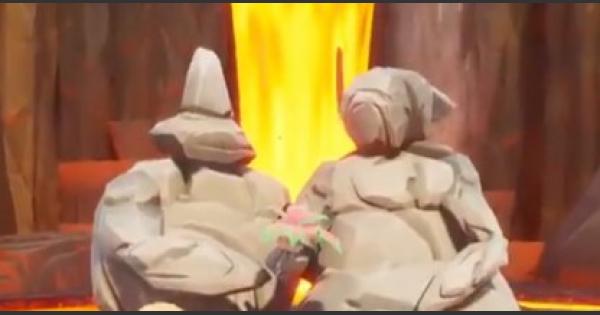 Find out the story behind Fortnite's Giant Rock couple featured in the Rock Love Spray! This includes a story timeline, summary, and more!

A Rocky Love Story in Fortnite

A story that started in Season 8 continues on to Season 9! The Giant Rock Man and Rock Woman have come far to get their happily ever after.

The story of the Rock Man & Woman has inspired a spray to be added to the game. You can get it by ranking up the Season 9 Battle Pass.

To get to their meeting point, the Rock Woman has dove into the Lava River to swim to the Rock Man.

With the Rock Woman on land, it was the Rock Man's turn to swim across the Lava River. He has his hand held high with a flower clutched between them.

The Rock Man & Woman are Finally Together!

The river has been crossed and the Rock Man & Woman can finally spend their time together. They sit near the Lava Fall with the Rock Man giving the flower to the Rock Woman.

Rock Family Has a Farm of Their Own

In the western side of the island near Sunny Steps, you will find a farm being tended by none other than the Rock Couple along with their child!

The Rock Child has left the side of his parents and is seen going off on his own. He can be seen waving goodbye to his mother.

Although separate, the Rock Child and Dog are seen climbing and sniffing out trees. Maybe they're looking for food?