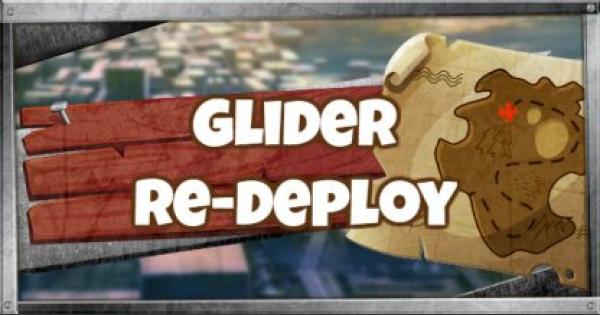 Check out the latest news in the Fortnite v6.21 update with the Glider re-deploy mechanic test update. You'll be able to re-open your glider in solo, duo, & squad matches!

As the Glider re-deploy has gotten positive results, this will continue to be active in the v6.21 update. A new feature is that for certain distances, Glider audio will be prioritized over weapon audio as part of quality of life changes for this mechanic.

In the Fortnite v6.20 update, the glider re-deploy mechanic will have a test run. Players will be able to re-open their gliders in solo, duo, & squad game match modes when jumping from at least 3 stories high.

What Is The Re-Deploy Mechanic?

Re-Open Glider When Jumping From 3 Stories

The Fortnite glider re-deploy mechanic allows you to re-open your glider when you jump from a height as long as you are at least 3 stories high.

To re-activate glider when jumping, you need to press the "Deploy" button. This will open up your glider so you can land safely & won't suffer fall damage.

Was Only Available In Limited Modes & Items

The glider re-deploy mechanic was originally only available in the the limited-time-modes such as Soaring 50's & Disco Domination, as well as when using items such as Rift-To-Gos & Launchpads.

Check Out The Re-Deploy Mechanic In This Video:

You'll be able to navigate the map faster with the glider re-deploy mechanic, either for quick escapes or switching locations.

Check Out Best Spots To Land!

If you find yourself a ways away from the eye of the circle, re-opening your glider in-game will let you reach it faster and get to safety.

Check Out How To Land Faster!

Re-opening your glider in-game generally means being able to get your targets faster, finding loot & enemies much quicker so matches will be much more fast-paced.