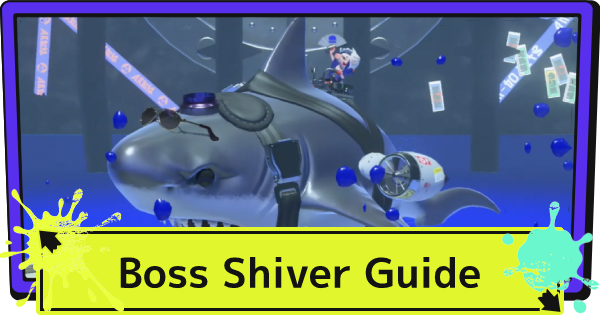 The guide of the Boss Shiver at Site 4 of Hero Mode in Splatoon 3. Includes how to defeat Shiver and the attack patterns of Shiver.

Check Other Stage Guides of Site 4

How to Defeat Shiver

Throw Smallfry into the shark's mouth

You can make the shark go up on the stage by throwing Smallfry into the its mouth. Shoot the shark a certain number of times while it's moving, Shiver will jump out.

When to Throw the Smallfry

Before the rush attack

There will be a slight pause before the shark's rush attack. Use that timing to throw Smallfry into the shark's mouth.

After the shark penetrates the stage

Before the tornado attack

You can throw the Smallfry after the shark rides the tornado and moves twice. But be careful that you may get hit by a shockwave attack if you miss it.

Refill the Ink Before the Shark Attacks

When the shark jumps on the stage, you can't attack it if you run out of ink. Make sure to refill your ink in advance.

The shark can paint the area with its attacks. If you don't repaint it, the space you can move will become smaller and it will be harder to refill the ink, so be sure to repaint well.

The Attack Patterns of Shiver

The shark jumps out and unleashes a straight line of slashes. It is easy to avoid because the attack goes in straight line.

An attack that the shark rushes onto the stage. The attack range is a little wide, but it takes a long pause before launching, so when it stops, move to the right or left to escape. There is enough time to avoid it even if you walk.

Attack from below the Stage

The shark's dorsal fin appears on the stage, which means it will jump out of the blue ripples later. There is a pause before it jumps out, so move away from the area when you see the ripples.

The shark rides on top of the tornado and attacks with a shockwave. The attack launches after the shark move twice, so be careful not to lose where it is and check how many times it moves to avoid it.