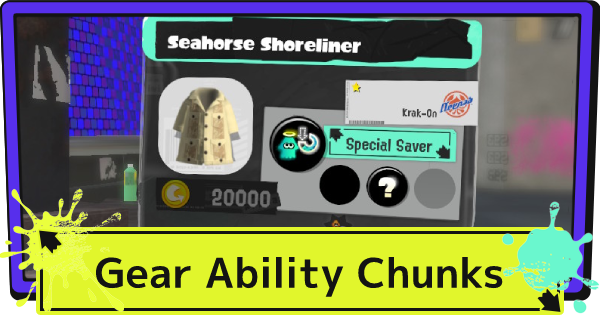 Gear Ability Chunks Farming Guide in Splatoon 3. Learn about secondary gear abilities, how to get/obtain ability chunks, how to use Scrub Slots.

How To Collect and Obtain Ability Chunks

You can use Ability Chunks by talking to Murch in the square. Scrubbed Clean is expensive and cannot be used without secondary gear abilities. The number you can get is 1 (Up to 3) per Secondary Gear Ability.

What are Secondary Gear Abilities?

The gear has up to three slots for Secondary Gear Ability that is marked with "?". The ? is unlocked when you accumulate experience in battle such as regular battle.

You can talk to Murch and get reroll slots to get the attached Ability chunks. To reroll a Gear Ability, you must have 3 slots open and a Super Sea Snail in your inventory.

Obtained From The Green Capsule Reward

One way to obtain pieces that does not cost money is to receive the Green Capsule reward from Salmon Run.

Can Be Exchanged For Pieces Of The Same Gear

When you receive the same gear, you can choose whether or not to replace it by comparing its performance with the current gear you have. If you choose to keep the gear you have, you will get a piece of the discarded Gear Ability.

What Are Ability Chunks

Gear Abilities Can Be Attached

Ability Chunks are upgrade materials that can be collected to upgrade your favorite gear such as Headgear/Clothing/Shoes. By collecting a certain number, you can use this to choose Gear Abilities.

Can Be Attached To Main Gear Ability

In the new version, not only the Secondary Gear Ability but also the Main Gear Ability can be replaced by using Ability Chunks.

The Number Of Ability Chunks Can Be Checked

The number of Ability Chunks in your possession can be checked from the Menu → Player Information → Gear Abilities . You can check this if you want to attach the Ability Chunks.