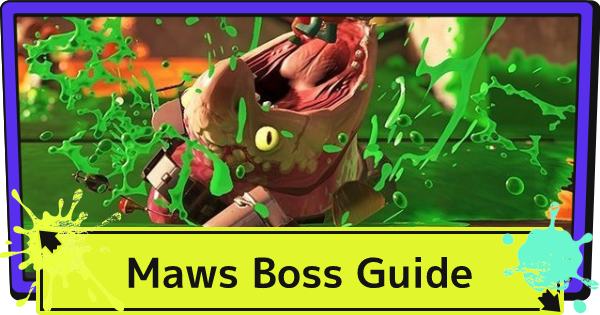 Maws is a Boss Salmonid in Splatoon 3. Learn more about Maws, its characteristic features, attack patterns in boss fights, tips on how to defeat Maws, drops and more in this guide.

How To Defeat Maws

Trick It To Swallow Bombs To Deal Massive Damage

Boss Maws move directly in the ink below their target and pounce up with its mouth open. Make sure to throw the bomb at its point of attack so it will consume it at the right time, thus dealing massive which can inflict massive damage to defeat it.

Can Get Damage Even From Basic Attacks

Even if you are unable to feed Maws with bombs, you can still use your weapons to inflict damage and defeat it. However, keep in mind that depending on the weapon you use, it will take time to completely defeat Maws instead of inflicting it with quick immense damage from bombs, so make sure to aim straight for its headlight and make calculated moves based on the current situation.

Watch Out For The Red Bulb In The Ground

The Maws boss is always lurking underneath with only its red floating sonar bulb sticking out of the ink, which it uses to locate its target. You can use it to know Maw's current location when it is not visible under the ink. Try to destroy it while making an escape. Note that if you can't clearly locate the red bulb, you may check if green circles appear as it indicates that Maws is about to rise above the ground to catch its target with its mouth.