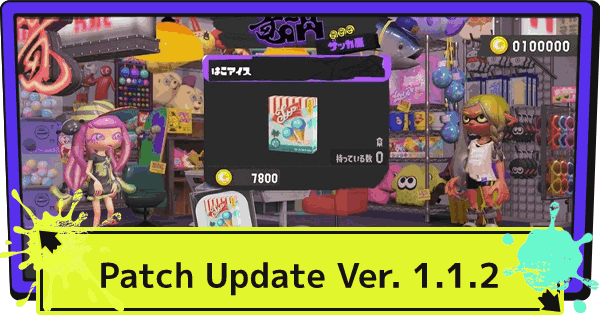 Patch Note Update Ver. 1.1.2 on Splatoon 3. Learn the details of the latest patch notes, how to download and install it including some information on future updates in this guide,

Details Of The Data Update

・Fixed an issue where players using dualies would stop attacking and enter swim form at the end of a Dodge Roll regardless of whether they were holding the ZR Button.

・Fixed an issue where players would not take damage for a certain amount of time after their Booyah Bomb armor was broken.

・Implemented measures to prevent issues where players would clip through and get stuck in terrain when turning from swim form into humanoid form near a Tacticooler placed in the corner of certain maps.

・Fixed an issue where the game would crash when the player finished editing their locker with a photo stand placed in the locker.

・Fixed an issue with receiving a new catalog after reaching catalog level 100, where a communication error happening or the game crashing could result in the catalog-receiving event not triggering.
- In cases where this issue has already occurred, the catalog-receiving event will play again once the player has restarted the software and entered Hotlantis.・Fixed an issue relating to Super Sea Snails. If you were unable to receive Super Sea Snails from the first Splatfest, the final-results news broadcast will replay and you will now be able to collect your Super Sea Snails.

New Weapons Scheduled To Be Added

The addition of new weapons is announced when the season changes once every three months. Additional contents such as weapons will continue to be released for two years after release.

At the start of Splatoon 3, Rank is capped at S+, and the X band will be released in future updates. Apart from the release of rank's level, League Battle, which also existed in Splatoon 2, is scheduled to be implemented in an update.

Although it is only a glimpse of the silhouette, the implementation of a large update is also introduced. If you look closely, it looks like the duo that appeared in the previous Splatoon 2 DLC...?

An update will add "Big Run" to Salmon Run. Details are unknown, but it seems to be a system different from the usual Salmon Run.

If you turn on the automatic update of the software from the main unit settings, the update will be performed automatically if the Switch is connected to the internet when the update comes. Unless you have a reason not to update, it is recommended to keep it ON.

Manually Press The + Button On The Software Screen

Software can be updated manually by pressing the + button on the software selection screen.

It Is Also Possible To Manually Download The Update Version

Even if you don't have an internet connection, if you have an already-updated Switch, you can update it by performing "Align version with people nearby".

What To Do When You Are Unable To Update

Check If You Are Connected To The Internet

You can't update it manually if you're not connected to the internet. Check your Internet Connection has been turned off by mistake, or if it is in airplane mode.

Check To See If There Are Any Problems

If you cannot update, it is possible that the Nintendo eShop server is down or an error has occurred. Check the official Twitter and official website for updates.

Does Not Arrive On Time

Even if the update time is announced, it doesn't always come at exactly the right time. Depending on how busy the server is and where you live, there may be a delay of several minutes to hours, so please wait a while and try again.

You Can Also Try Restarting The Power

When the software is not updated at all, it is also effective to restart the power supply of the Switch once. Press and hold the power button and select "Power Options" to reboot.