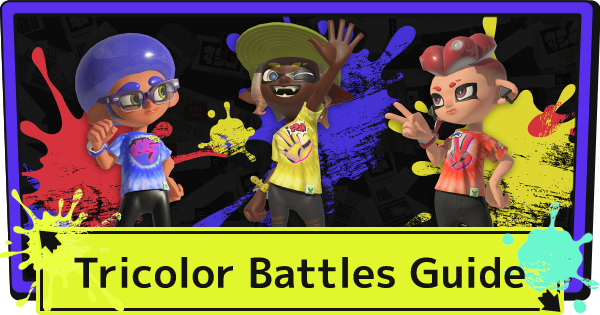 What Is Tricolor Battle/Tricolor Turf War?

Tricolor Turf War is a battle mode that occurs randomly in the second half of Splatfest, during this mode, the second and third-place teams attack the team in the first place during the Splatfest Halftime Report.

Less Chance Of It Happening Compared To Splatfest World Premiere

Based on the feedback from Splatfest World Premiere, the incidence of Tricolor Turf War has been adjusted and reduced. As a result, the first place team is less likely to initiate a Tricolor Turf War, while the second and third place teams may initiate a traditional Turf War even if they have selected Tricolor Battles.

The Fight Is Divided Between Attackers And Defenders

The One Who Ink Most Turf Wins

Attackers Will Benefit From Ultra Signal

In the center of the area on the defender's side, there is an Ultra Signal. When someone on the attacker's side touches the Ultra Signal, the signal is "Attempted" and can be secured after more time has elapsed. After a certain amount of time has passed, the signal will automatically ink the stage, giving you the advantage in battle.

Up To Two Ultra Signals Appear

Up to two Ultra Signals can appear in one Tricolor Turf War. Even if an attempt fails, the time until the Ultra Signal is secured becomes shorter each time an attempt is made, so do not give up and keep attempting.

The attacker's Clout varies greatly depending on whether or not they have stopped the defender from winning. However, Clout also varies with place, the number of Ultra Signals secured, and the number of Attempts, so that Clout can be earned even when a victory is not won.

How To Join Tricolor Battles?