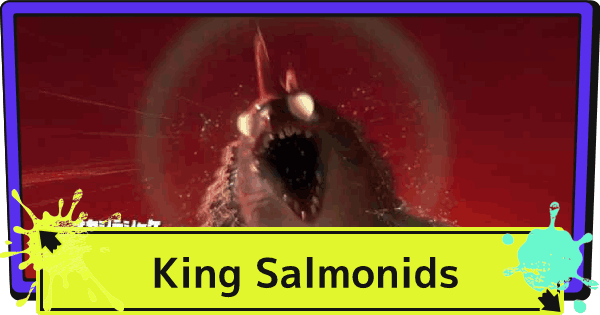 King Salmonids is a boss in Splatoon 3. Learn more about Cohozuna, how to defeat the King Salmonid and Boss Salmonids in the Salmon Run Wave event plus their rewards in this guide.。

Salmometer Increases With Each Clearing

Salmometer increases with each work cleared. The current accumulated Salmometer can be checked at any time from the upper right corner of the Lobby.

Appears With Probability After Clearing Wave 3

After the wave is cleared, and the water level at the time of the third wave is taken over to begin the King Salmonids combat, King Salmonids arrive with a high likelihood. Be careful not to take too much damage and be surrounded by enemies, especially during high tide, when the range of movement is limited.

The More King Salmonids Appear The Higher The Gauge

Gauge Will Be Reset After The King Salmonids

How To Defeat King Salmonids

The King Salmonid battle will change weapons as well as the 1/2/3 wave changeover, so make sure you know your weapons! Also, since the time limit is only 100 seconds, it is important to understand the necessary strategy to attack King Salmonid.

Special Attacks Reset To One

The Power Egg Cannon Deals The Most Damage To King Salmonids

King Salmonids are highly resistant to basic attacks from main weapons while the Power Egg Cannon generated by consuming Golden Eggs produces the most significant source of damage against it. Ideally, when using special attacks on Boss Salmonids, the King Salmonids should also be included in the attack, since special attacks can do some damage.

Attack As Far Away From King Salmonids As Possible

King Salmonids have powerful attacks, so make sure to fight at a safe distance as much as possible to avoid getting too much damage. Even if you have close-range weapons, it is important to attack the Boss Salmonid with the main Weapons or by using special attacks → Attack with the Power Egg Cannon from a long distance.

Scales Are Obtained According To The Damage Inflicted

As a reward, scales can be obtained according to the damage inflicted on King Salmonids. You can still get scales even if you fail to defeat King Salmonids, so do not give up and keep attacking until the end.

Scales Can Be Exchanged For Jumpsuits

Scales obtained can be exchanged for Jumpsuits and other items at the Grizzco Industries counter. There are also limited Splashtags, so be sure to do the King Salmonids challenge repeatedly and aim for exchanges.

Main Items That Can Be Exchanged For Scales