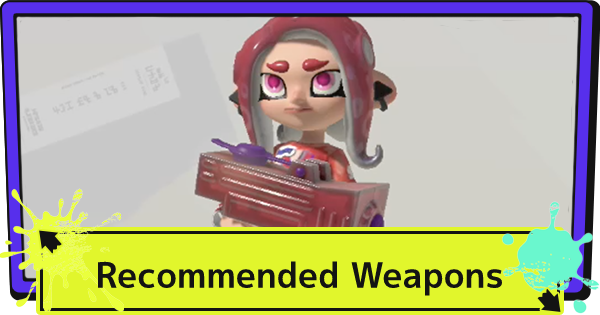 The Weapon Of Your Choice

Upon starting the game, it is common to choose the weapon of your liking, such as a weapon that would be aesthetically good with your character, or any weapon that will take your interest will not be a problem.

Shooter Is Highly Recommended Due To Its Performance

There are different types of weapons in Splatoon 3, and among them, is a type of weapon called Shooter. Shooter is highly recommended for beginners since it gives off a high rate of fire, making it easy to paint the stage, and it can be deceptive even if it misses a little when attacking.

Chargers & Bow (Stringers) Are Difficult To Use

The Charger and the Stringer, which were added in Splatoon 3, are so-called single-shot weapons. It will be quite difficult for a beginner to hit an enemy who is far away and looks smaller when conducting a single shot. If you think you can't use it once, since you are used to using a Shooter, try again some other time until you get used to the Charger & Bow's gameplay.

※Tap The Icons To Jump On To The Weapons.

Splattershot Jr. is a weapon with a high performance in painting and also for shooting. It's combat ability is quite low, this is why you need to remember that its role is to repaint the opponent's ink rather than to combat the enemy. It is also better if you can paint the feet of your allies during battle.

A Flexible Weapon That Can Paint & Kill

The Splashooter has a Kill Performance that can take down an enemy with just 3 shots, and it also has a good paint ability. Additionally, it focuses mostly on kills, so you might consider trying taking kills with just 3 shots too!

While the Aerospray MG has high paint performance, its range and power are weak making it unsuitable for kills. However, the Shark Ride special has very high killing performance, so it is a weapon that can be switched to paint and then aim for kills once the specials have accumulated.

Easy To Use Even If Your Aim Is Not Good

The most unique feature of the Tri-Slosher is that its main shot is split into three separate shots. Thanks to this feature, it is easier to make a shot because you will be aiming it at the surface.

Gear Power That Fits The Tri-Slosher

Has High Easy Skills With Conditions

The Clash Blaster's main weapon can be killed with two direct hits, a cracking sound, or with four blasts cracking sound. Since the attack can also take away the opponent's foothold, it is possible to aim for a one-sided kill if you can get within the attack range.

Gear That Fits The Clash Blaster

The N-ZAP85 is a flexible weapon that can paint and at the same time can execute a good amount of fighting. The special Energy Stand can give you and your allies a big buff. Consider attacking together with your allies while using paint and specials.