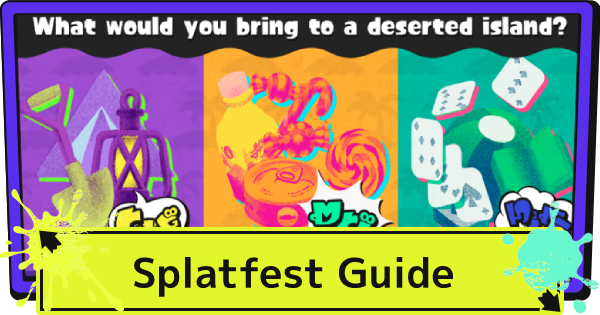 This Guide for Splatfest Results & Level Rewards in Splatoon 3 (Spla 3). Includes how to participate, the Level Rewards Super Sea Snail, and how 10x/100x/333x Battle occurs.

The Final Results Have Been Announced! The Winner is..?

The 1st Place Team is Gear!

The Splatfest with the theme "What would you bring to a deserted island?" has finally ended with the Team Gear winning at the first festival.

Ranking at the Halftime Report

Splatfest has two divisions, Open & Pro. In Open mode, you can play alongside players on your Splatfest team. Meanwhile, in Pro mode, participants can only enter & play solo and have a chance to get into the Splatfest Top 100.

Get in the Splatfest Top 100

How to Get into Special Battles and the Rewards

If you win the 100x/333x Battle, you can get a crown that will be shown above your name during the Splatfest. It is just a sign of winning the 100x/300x Battle and has no special effect.

Your Splatfest Rank can be increased by earning Splatfest Points and you will be rewarded with more Super Sea Snail when getting a higher rank by the end of the Splatfest.

The team which wins in the final result of Splatfest gets more Super Sea Snail as a reward. If you have not voted yet, pick your team carefully.

If you give the Super Sea Snail to Murch, you can increase the slots of your favorite gear (such as clothing) or change it to a random gear ability.

Super Sea Snail - How To Get & Location

How To Participate In Splatfest

Vote for the Theme in the Square to Participate

You are automatically counted as a participant for the Splatfest by voting for a theme at a stall-like place in the Square during the Splatfest event period. When the main event starts, the normal Turf War match gets changed to Splatfest.