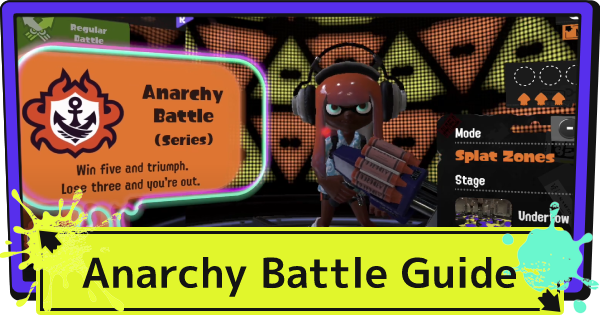 What Are Anarchy Battles?

Anarchy Battle is Splatoon 3's Ranked Battle where players compete for Rank Points. This heavily relies on skill and is a more serious battle mode compared to Regular battles. Previously, it was named "Ranked Battle" in Splatoon 2.

Unlocked When You Reach Level 10

Anarchy Battles are unlocked and become playable when the player reaches Level 10. Until then, players can play Regular Battles, Salmon Runs, and other modes to increase their level.

If You Transfer Data From Splatoon 2, It's Available From The Beginning

Players who transfer their data from Splatoon 2 will have Anarchy Battles available even when only at Level 1. Join Ranked Battles from the Lobby after your first Turf War.

How To Transfer Data and Get Benefits

The Battle Type for Anarchy Battles switches every two hours. In-game, you can check which Battle Type is in play by clicking the X Button then "Stage Info". Outside the game, You can check the day's schedule by using the SplatNet 3 in the Nintendo Online application.

When you play Anarchy Battles, you can choose between "Open" or "Series" Battles. The two types are have different rules, including how you earn rank so learn their differences then choose which type you prefer to play.

Play "Series" If You Want To Get Rank Points In Bulk

Series Battles work wherein the more wins you get or the more awards you get, the higher the bulk reward at the end. You are out of the battle when you lose three battles. Players have to pay a challenge fee with their rank, making this a high risk, high reward payoff type of battle.

Rules and Stages are different for Open and Series Anarchy Battles. If there is a specific Battle Type or Stage you want to play, check the schedule and play Anarchy Battles when they are available.

Rank points are earned when winning Anarchy Battles. Rank is based on the amount of Rank points earned and is classified between the lowest C-, C, C+, B-, B, B+, A-, A, A+, to the highest S, S+0. From S+0, it will increase numerically until it reaches S+50.

Once Rank Is Up, It Will Not Come Down

Even if you lose multiple games in a row, your Rank will never go down. This will allow you to push for improving your Rank without risk.

Rank Is Shared Between All Battle Types

In previous Splatoon games, Rank is separated between Battle Types, but in Splatoon 3, Rank is shared between all of them.

X Matches To Be Added In Future Updates

In a Future Update, players with RankS+0 or higher can participate in X-Matches. In X Matches, Players will battle for X-Power instead of Rank Points. Gain a higher ranking by increasing your X-Power. X-Matches are designed to increase X-Power. Since players cannot form groups in this type of match, it's a test of one's own abilities!

It is recommended to use your favorite weapon to have fun, but if your focus is winning, you should use stronger Weapons. It is also important to wear Gear with Gear Abilities that work well with your Weapon. Make sure to also select your Gear Abilities carefully.

If your win rate when fighting enemies is low, it will be difficult to win battles. Start by checking if your sensitivity setting works to assist you when aiming. Try out different settings and find out which ones work well for you.