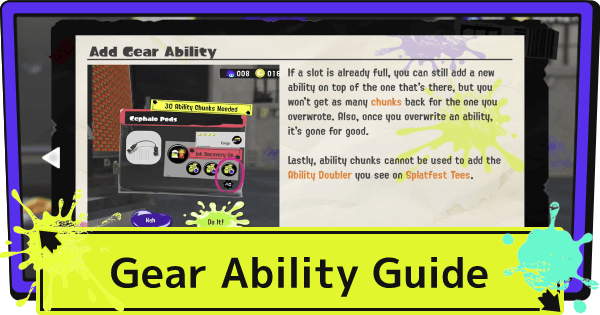 Splatoon 3
How To Add/Change Gear Ability

How To Add/Change Gear Ability

Get & Use Gear Ability Chunks

To Add Abilities, collect Gear Ability Chunks and head to Murch who can be found at the Square. The primary gear ability can be reused so it is possible to customize and apply it to all of your selected favorite gear.

Slots Can Be Overwritten and Reattached

Ability Chunks can also be used to modify Gear Abilities. When you do, you get one piece of gear power that was already attached.

Murch Is In Front Of Square Lobby

In Murch's Scrub Slots, all slots can be reverted to the unknown (?) state. When you have accumulated sufficient experience again from the battles, you can reattach the random Gear Ability. Keep in mind that this procedure costs 20,000 money.

Still a feature available from Murch, Reroll Slots can be re-attached to random Gear Abilities by using Super Sea Snail. However, since the Gear Slots have already been released up to three, it is also a condition to raise the Gear Star Power and acquire 3 Slots Gear.

Star Power Level Up Guide - How To Add Gear Slots

Can Get Random Reroll Slots

Even if you overwrite Gear Abilities with Super Sea Snail, you can get one of the ability chunks randomly.

Get Super Sea Snail From Splatfest