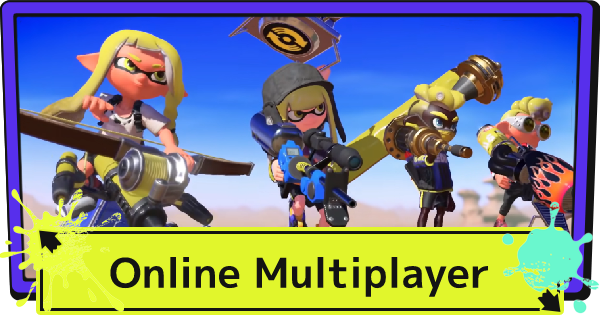 Check out this Online Multiplayer Guide for Splatoon 3. Includes how to play online, how to join teams, online-only content, Nintendo Online membership, play with friends!

How To Play Online Multiplayer

In order to join and play online multiplayer in Splatoon 3, you need to be subscribed to have a paid Nintendo Online membership.

Most of Splatoon 3's content are online. You can't even play offline or on local matches, making it hard to enjoy the game without going online. If you want to get the most out of Splatoon 3, having a Nintendo Online membership is essential.

How To Go Online

Participate In Online Matches From The Lobby

By going to the lobby, you can participate in Regular Battles or Anarchy Battles. From the lobby, find the capsule-like machines and select rules to start a match. Until the match starts, practice painting in the lobby as you wait.

It's Possible To Play With Friends

You can join a friend's lobby by choosing a match with a Friend. You can also create your own room. Setting passwords is also possible if you want to limit who can join in.

How To Join or Invite Friends

Grizzco Industries will let you play Salmon Run. Since its a coop mode against NPCs, playing it with friends is important.

Local Matches Can Be Player On The Shoal

If you want to play with nearby people (offline), go to The Shoal. Talk to the reception where you can play a Private Battle or Salmon Run.

How Many People Can You Play With Online?

Can Play With 2-8 People At A Time

It depends on the play mode, but the main content of Splatoon 3 includes 4-to-4 Team Battles. Up to four people can play in the same team, but up to a total of eight people can participate in a battle.

Up To 2 People Can Spectate

Regular Battle is the most basic battle mode wherein 2 teams fight against each other to paint as much of the battlefield within 3 minutes. The Splatfest, an event held for a limited time, is also a Regular Battle so you can also enjoy them casually.

Anarchy Battle is a battle mode that competes for Rank, making it Splatoon 3's ranked battle. Aim for victory to get a higher Rank! Note that Ranked Battles are tougher than Regular Battles so prepare for it!

Salmon Run is a coop mode where everyone aims to achieve the quota specified within the time limit. It's played with up to four people. Because you fight Salmonids (NPCs), you can enjoy a more casual battle.