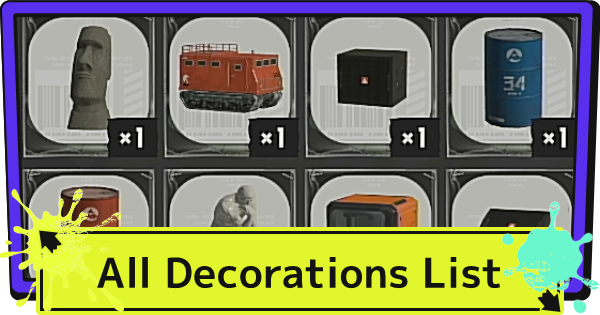 Splatoon 3
All Decorations & How to Get

The guide for Decorations in Splatoon 3. Includes how to get, where to get and how to use the Decorations.

All Decorations and How to Get

*Listed below are the prices at General Store.

Ways to Get Decorations

Once you reach rank 4, you can buy decorations at General Store. The selection changes every day, and it varies from player to player, so be sure to check back often.

Get to General Store from the map by pressing X button

Press X button in the lobby or square to show the map. Place the cursor on where you want to go and press A button to get to there instantly, you can use this way when you're not sure about the location.

Obtained From the Exploration in Hero Mode

You can obtain decorations on the map "Alterna", where you can go in Hero Mode. You can get items by shooting the screws, which include a couple of decorations.

Pick up the decorations you find at the lobby terminal

You can't use the decorations you find in Hero Mode until you pick them up from the Lobby Terminal.

▼Check Out the Locations on the Map in Hero Mode!

Obtained by Searching For Items With Shel-drone

In Hero Mode, you can use 999 Power Eggs to request the Shel-drone to search for items once per day. Items can be picked up at the terminal in the lobby the day after you used it.

Obtained From the Catalog Level Reward

After you reach rank 4, you can obtain the Level Reward of Catalog which you can get at the General Store. You can also get various items from the Catalog other than Decorations.

Catalog - Levels, Rewards, & How To Unlock

Exchange With Scales in Grizzco Industries

You can exchange for decorations with Scales in Grizzco Industries. Scales can be obtained by defeating King Salmonid that appears in Salmon Run shift.

You can get rewards by raising your rank in Tableturf Battle (card game). The rewards include Decorations, play Tableturf to collect them.

You can get Decorations when you reach rank B, A, S, or S+ for the first time in Anarchy Battle. Receive your Decorations from the lobby terminal after reaching these levels.

Obtained From the Shell-Out Machine

Where To Get Decorations in Hero Mode

※Tap the icons to mark the obtained ones.

How to Use Decorations

To Decorate Your Locker

Decorations can be used to customize your locker in the lobby. Lockers are unlocked at Rank 4, and can be decorated with other items such as Weapons, Gears, and Stickers.

Locker Room - Location & How To Unlock