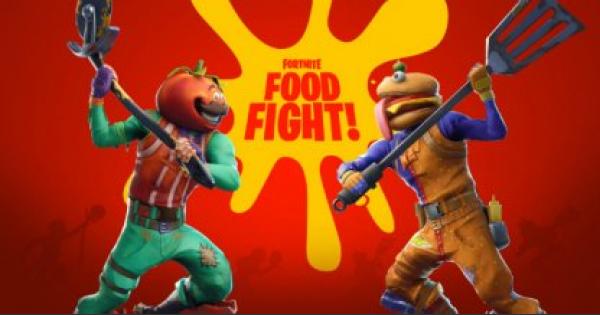 Team Tomatohead or Team Beef Boss? Take a side, build a defensive fort around your mascot, and destroy the enemy mascot to win the Food Fight LTM! Find out about the unique game mode features and tips here!

Food Fight is a 16V16 LTM where players need to destroy the enemy mascot to win! Players get to respawn and keep their inventory so that they can rejoin the fray until one mascot breaks!

The Food Fight LTM is a fun game mode where you build and defend your mascot against the enemy team. Respawns allow you to continue the match without worrying about using risky tactics.

Players need to build a solid defense around their mascot and arm themselves while the barrier is up. It's a race to destroy the enemy mascot once the barrier goes down!

An impassable wall will block the enemy team from attacking your team for the first 5 minutes of the match so your team can build a defense around your mascot and gather gear!

Each Team Has A Mascot Head To Defend

2 half-built restaurants each with a mascot head are at the center of the map. Each team will need to build defenses around their mascots and prevent them from being destroyed.

In this Limited Time Mode, respawn is available. Players respawn 7 seconds after getting eliminated.

Keep Your Inventory After Respawn

Your inventory stays intact when you respawn so you won't need to worry about gathering gear again and just focus on fighting!

Eliminated players will spawn 30 Wood, 30 Stone, 60 Metal, and a percentage of the ammo they have in their inventory.

Double The Resources When Gathering

The resources you get when gathering has been increased 100% to make it easier to get materials for building your defense. There will also be more resources spawned as floor loot.

Tips To Win In Food Fight

Use Metal For Building Defenses

Since gathering is increased, use Metal to make your defenses so that they will be extra sturdy against attacks.

Don't Be Afraid To Be Aggressive

In Food Fight, respawn is available and eliminated players spawn ammo and materials. Use respawns as an opportunity to relocate to a better attacking position or to help out teammates!

This is a great game mode to complete your challenges, especially damage and elimination ones!