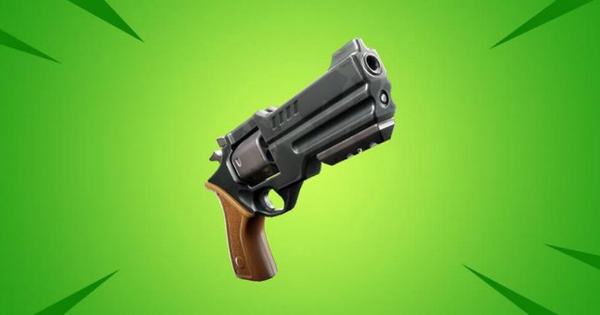 Weapon Stats & Strategy for Revolver! Read here to find information about the damage (DPS), rarity and gameplay video for Revolver!

Whether in Solo, Duo, or Squad, The Revolver's effectiveness lessens the longer a game goes. It is a good startup weapon capable of bringing down unarmed enemies.

Finding the right range for the Revolver is tricky. Its damage dropoff and slow fire rate makes it ineffective in fast long-range and short-range combat. The middle range is where it is most effective.

Players can quickly get their hands on a lower variants of the Revolver due its rarity and spawn rate. It's one of the few weapons you can expect to show up at the start of the game.

Lower variant Revolvers are effective in gunning down enemies early in the game where everyone is scrambling for weapons. Two successful shots can easily bring down an unprepared enemy.

:p:The Revolver's first shot will always be accurate at a certain range. Add to the fact that its a hitscan weapon and it makes connecting first shots easier against stationary enemies.

When it comes to the Legendary and Epic Revolvers, they are a force to be reckoned with as they do 66 and 63 damage per shot.

Utilize the accurate first shot of the Revolver to get head shots. One successful head shot with the weapon will amount to 120 in damage, enough to knock down an unprepared enemy.

Use with Weapon Combos

The Revolver in its own is risky to use. Have another weapon in your loadout and switch between them depending on the situation.