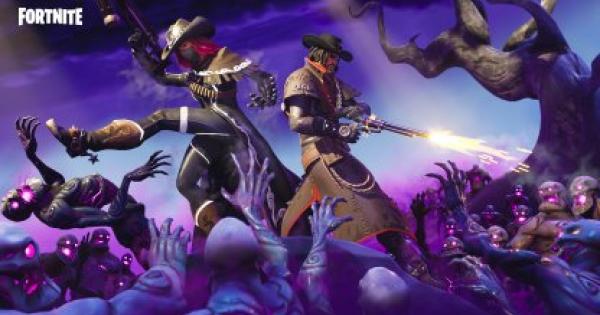 Keep your aim steady, the Team Terror Limited Time Mode is out! Read this guide to know everything there is to know about this LTM, including tips on how to survive and win it!

Prepare for an all out battle as 2 teams of 32 players will fight it out against each other and Cube Monsters to be the last team standing in the new Team Terror Limited Time Mode!

With 2 teams of 32 players, there will only be a total of 62 players per round in the Team Terror LTM. This is considerably less players per match compared to other game modes with 100 players each.

Cube Monsters will Join the Battle

During the game, waves of Cube Monsters will fill the battlefield, posing a threat to both the teams. Monster Spawners will appear across the map and spawn whenever the storm closes in.

Cube Monsters will drop weapons and ammo once defeated. Tougher opponents like Gold monsters and Monster Spawners will drop legendary items if they're destroyed.

Farming resources has been increased by 75% with floor loot chance raised by 15%. Additionally, chest and supply drops will give double ammo and consumables!

See an enemy fighting against allies or Cube Monsters? Take the opportunity and shoot them while they're distracted to either kill them or get them to back off.

Check Out How to Improve Your Accuracy

Prioritize Taking Out the Monster Spawners

Make taking out the Monsters Spawners your main priority as destroying them will stop the monsters from spawning in the area. Shoot the spawner from a distance to stay clear of the monsters.

Build to Create a Path

Create a tall structure and make a path if you find yourself in the middle of a monster swarm. You can also jump from high structures to initiate your glider and fly out of there.