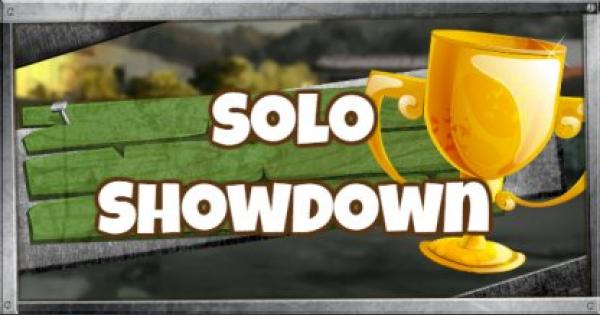 Solo Showdown is a Limited Time Mode in Fortnite where players participate in a competitive Battle Royale experience against other players to win in-game rewards.

To join, players must compete in at least 25 matches in the Solo Showdown within the same server region.

Who Can Join Solo Showdown

The Contest is open to participants worldwide, but is void wherever restricted or prohibited by law.

"Employees, officers, directors, agents, representatives of Epic Games, Inc. (“Epic”) (including the legal, promotion, and advertising agencies of Epic) and their immediate family members (defined as spouse, mother, father, sisters, brothers, sons, daughters, uncles, aunts, nephews, nieces, grandparents and in-laws, regardless of where they live) and those living in their household (whether or not related), and each person or entity connected with the production or administration of the Contest, and each parent company, affiliate, subsidiary, agent and representative of Epic are not eligible.

Epic reserves the right to disqualify any Contestant in its sole discretion for any reason, including without limitation if Epic determines Contestant is cheating, hacking, harassing, using abusive or offensive language, account sharing, teaming, sabotaging, spamming, engaging in social engineering, scamming, or violating the Fortnite EULA."

The Fortnite Solo Showdown will implement a specific scoring/ranking system that will be awarded after each match.

Only the first 25 matches will count towards your total score, so be prepared to do your best!

Players get 6 extra points for every elimination they make in-game.

In the case of score ties, these will be used as tiebreakers (in order of importance):

Other than manually calculating your points, there is no confirmed official method or calculator to determine cumulative Solo Showdown points.

Tips to Get More Points

Check Out How To Get Top 10

Eliminating players award you 6 extra points after the match, shoot down as many as you can for more points!

Check Out How To Improve Your Aim!

Fortnite Solo Showdown prizes will be distributed in V-Bucks and the top 100 contestants with the highest cumulative points will receive prizes.

How To Claim Solo Showdown Rewards

Players who have placed in the top 100 of Fortnite's Solo Showdown will be notified of their achievement by August 3, 2018.

Players may need to respond to a prompt within seventy-two hours or else forfeit their prizes.

"Selected Contestants will be notified on or about Friday, August 3rd, 2018 and may be required to respond (as directed) to the notification within seventy-two (72) hours of attempted notification.

The failure to respond timely to the notification may result in forfeiture of the Prizes; and, in such case, Epic may choose the next highest scoring Contestant. The Selected Contestant may be sent a declaration of eligibility / liability / publicity release (“Release”).

Unless restricted by law, Selected Contestant will be required to complete and return the Release within seventy-two (72) hours of the date Release is sent."

Solo Showdown July 2018 requires at least 25 matches to qualify, reduced from the 50 matches required in the May 2018 version.

The previous version of Solo Showdown awards participants who complete 50 matches with a new spray emote. The current version does not have any spray emote rewards.

Solo Showdown July 2018 has added six (6) extra points for every elimination made in a match, the previous May 2018 version did not have this.

Solo Showdown July 2018 offers eligible players the chance to be invited to Fortnite Summer Skirmish events while the May 2018 version did not offer this option.