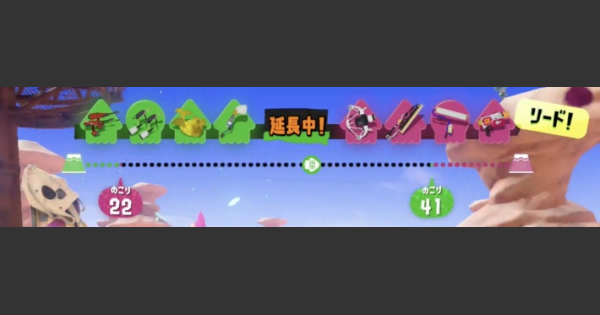 How To Play Rainmaker - Tips & Guide in Splatoon 3. Learn about the rules, recommended weapon, tips & tricks, objectives, overtime conditions, Rainmaker Shot and so much more.

Bring The Rainmaker To The Goal

The objective of the Rainmaker is to carry the Rainmaker from the center to the enemy team's base. There is a counter that increases and decreases depending on how many territories are reached. The winner is determined by how much the count is reduced. This means that the team with the lower count when the timer reaches 0 will win the match.

If the Count Reaches 0, It Is A Knockout Win

If the count is reduced to 0 by carrying the Rainmaker to the enemy base. The player wins by a knockout decision even if there is still time left in the match. Conversely, if the opponent scores a goal and reduces your team's count to 0, the game is a knockout loss.

Team With The Lowest Count Wins

If the time runs out (5 minutes) without either team being knocked out, the team with greater reduction in count wins the match.

Rainmaker Is Protected by A Barrier

At the start of the match or when either team loses the Rainmaker, the Rainmaker is protected by a barrier. The barrier expands as it is hit with ink. When it expands to its limit, the barrier will explode. If both teams apply the same amount of ink at the same time, the damage is canceled out and the barrier does not expand at all.

In Splatoon 3, Checkpoints were added in the Rainmaker game mode, just like Tower Control. It is necessary to go through Checkpoints before being able to reach the goal. Step on the platform while holding the Rainmaker to decrease the count.

Go In Either Checkpoints

In Rainmaker, two checkpoints can be seen. It is ok to go through either of them. This means that you have two different paths that you can take.

Special Gauge Builds Up If The Enemy Holds The Rainmaker

When either of the conditions above is met, the special gauge of all allies will gradually accumulate. The first condition is particularly important. Specials will build up when the opponent has the Rainmaker, so you should build up your specials before jumping into battle.

Be Aware Of Carrying & Protecting The Rainmaker

Immediately Move Towards The Rainmaker

Immediately after the game starts, head to the Rainmaker area in the center of the stage as soon as possible. If possible, try to break the barrier of the Rainmaker before the enemy does. When the barrier is broken, ink of the color of the barrier will blow up painting the entire area around you at once or kill the opponent during the explosion. If the barrier does not break, ignore the Rainmaker for the time being and focus on eliminating enemies.

Things To Look Out For Advancing The Rainmaker

After Outnumbering The Enemy, Focus On The Rainmaker

Holding the Rainmaker not only makes it imposible to attack with weapons, but it also gives away your location to enemies, making you an easy target. It is dangerous to hold it in a 4 versus 4 situation, so it is important to fight normally and eliminate players first. Once you have killed an enemy and secured your safety, proceed to the Rainmaker.

The other 3 players who does not have the Rainmaker should focus on protecting the one who has it. Paint a path for them and repel incoming enemies approaching the Rainmaker.

If You Have The Rainmaker, Advance With Rainmaker Shot

If you have the Rainmaker, use ZR long-press to use the Rainmaker Shot. This will keep the enemy away from you. If your friend gets a kill in the mean time and you have the advantage in numbers, avoid using this and focus on getting to the checkpoint.

Choose The Route With Less Enemies

Checkpoints are placed in two locations but you only need to pass one of them. It is highly recommended that you carry the Rainmaker after identifying which checkpoint has less enemies that you have to deal with.

If You Are About To Die, Proceed As Far As You Can

If you are holding the Rainmaker and the other three players have died or you find yourself in a situation wherein there is nothing you can do, try to advance as far as possible to the enemy's side before dying. In addition to simply reducing the count, the deeper you advance into the enemy territory will buy you more time before the enemy can reposition themselves to the center of the stage.

Use Super Jump To Get Back To Battle

If the Rainmaker is on the enemy's side and can still be advanced, use the Super Jump to return to the front line. Even if you die, you will have enough time to prepare for defense.

Be Aware When Stopping The Rainmaker

Fight With The Rest Of Your Team (4 Players)

It is not limited to Rainmaker mode, but it is unlikely that the situation will improve if you rush alone. Therefore, it is important to wait for your ally's respawn time and fight together. If multiple allies die, you can give the space to the enemy and retreat to regroup.

Accumulate Specials Before Going In

Specials are sometimes enough to turn the tides if you have a disadvantage. Paint your own area to accumulate specials before going back to the Rainmaker. Also, while specials are powerful on their own, they can easily turn things around if timed with the specials of your allies.

Keep An Eye On Both Routes

You will not be able to predict which route the enemy will take to get to the checkpoint. It is important to keep an eye on both of the routes to distribute your defense and determine where the enemy is going.

The Rainmaker mode has a certain number of routes available so it is possible to check which route will the enemy take. It is easier to stop them from advancing if you have a high position where you can shoot down the enemy's route. This will apply the enemy pressure making it difficult for them to advance.

One Player Can Flank

The Rainmaker Returns To The Center

If you fall off the map while holding the Rainmaker, it will return to the center of the map. Use this when you are advancing deep into the enemy territory and you want to make sure that it returns to the center.