Linh - How To Romance & Marry

Confess To Linh After 6 Hearts

After getting even closer to your partner of choice, you can propose to them when you reach 10 hearts. If you've seen all 9 other events, you can give Linh a Blue Feather to propose to her. However, you need to upgrade your house beyond a Log Cabin to do so!

10 hearts event -> Condition is giving the blue feather to Linh. Linh told the player that she has been waiting the day the player confessed to her. Linh then received a letter from Sandra. Linh is happy that Sandra replied her letter 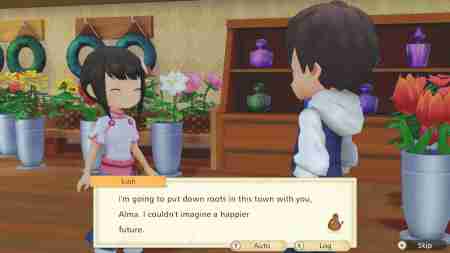 9 hearts event -> Linh sprained her ankle while walking at the mountain with you. You then carried Linh back to the shop.

She tells her that her friend's name is Sandra. The player then suggest Linh to visit her. Linh agrees and thinks about the people that she loves in the town. She tells the player that she will write another letter to Sandra.

If point 1 -> Linh is not sure that she will reply because she hasn't reply in a week, where usually she will directly reply her letters.
If point 2 -> Linh agrees that she could be overthinking it, but it doesn't change the fact that the letter has not arrived.

Linh 8 hearts event -> time 8-10. Description-> Linh tells you that she hasn't gotten a reply from her best friend. She is worried that her friend is upset due to mentioning that she is dating. Linh asks your thoughts on it.
-I'm sure she'll reply eventually
-You're probably overthinking it