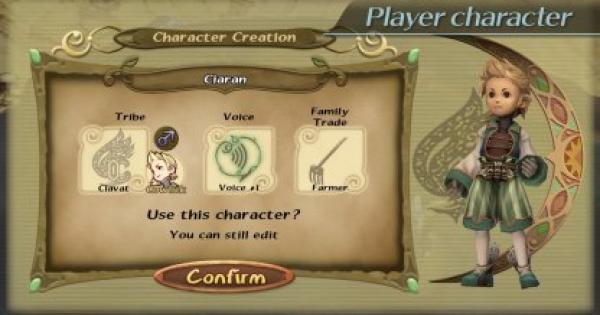 Things To Know Before Playing

Your Selection During Character Creation Are Permanent

Although you are not able to change your character's looks, you may use the Mimic system, a New Feature in Remastered version to replicate the looks of one of the story side characters.

You may create up to 8 characters per save. You will need 4 different Family Trade to acquire the best gear in game, and thus will need at least 3 more side characters to achieve this.

If you intend to create a side character, the Tribe, Family Trade may be compensated with other characters. In such case, you may choose as you see fit.

The caravan ventures into the miasma filled dungeon in search for the life saving Myrrh, an essence used to temporarily rid the town vicinity of the miasma. Collecting 3 Myrrh will progress 1 year in your town.

The basic premise is continuing these 2 steps. Each time the year passes, more area will be open for you to explore.

Just Collecting Myrrh Will Not End The Game

Just going around and collecting Myrrh will not allow you to reach the ending. You will need to tune the Crystal Chalice's element to pass through the miasma stream, and reach the Mount Vellenge.

Read more about how to reach the ending from the guide below.

As you collect Myrrh from other dungeons, once completed dungeons' Myrrh will be available for harvest again but will have increased Dungeon Level. The higher the Dungeon Level gets, more difficult it becomes.

● Dungeon Level Have 3 Stages
● After harvesting Myrrh,collect 4 Myrrh from different dungeon to have the dungeon's Myrrh available again. This will increase the Dungeon Level by 1.
● You may harvest Myrrh even after reaching Dungeon Level 3 by completing the aforementioned requirement.

● Item drops changes. The monster drops and Artifacts will be replaced with rarer items.
● All monsters including bosses will be buffed. They will get wider variety of attacks, more enemy units, or may change to a stronger variant.
● Dungeon terrain may change.Dungeons such as Goblin Wall or The Mushroom Forest may change depending on the Dungeon Level, and allo access to previously unreachable areas.

This game does not feature the conventional character level system. Instead, your character is upgraded through collecting Artifacts, Weapon, Armor and other equipments.

Check Out The Character Stats Guide

Artifacts are FFCC's unique progression system. You may find these Artifacts in a dungeon randomly, and will provide you with passive buff effects.

How To Collect All Artifacts

The Artifacts you can obtain after beating a dungeon differs with Dungeon Level & Bonus Points. There exists certain items where you may not obtain them again once leveling the Dungeon Level up, check the chart below to not miss one for your collection.

Each Tribe Has Different Weapon & Armor

Each Weapon Has Different Focus Attacks

The Focus Attacks are all weapon-bound. Some weapons may have great status, but Focus Attack may be hard to use. Try to find one that best suits your playstyle.

Looking for a best build for each tribe? Check out the guide below.

All Tribe characters will need to find a Magicite to be able to cast a spell in a dungeon. These Magicites can be found from enemy or chests, and magic can be casted by setting them in your command slot.

You Will Lose Carried Magicite Upon Leaving Dungeon

The Magicite you find in the dungeon are temporary. You will lose them upon exiting the dungeon.

The Ring Artifacts will allow you access to spells without the use of Magicite. They are obtainable mid-game, and have a relatively low drop chance, but will be well worth your effort.

* Bracketed number represents the Dungeon Level for when the said item spawns.

You may cooperate with others to combine your magic to cast more powerful spell. You may also enchant your weapon with magic by Focus Attacking at the same time as the Magic has been cast.

How To Combine Magic Solo

When playing solo, you can combine the Magicite or Magicite Ring together in the Command list. In order to enchant a weapon, select an unequipped weapon and a Magicite or Ring.

Also, there are chance that your Moogle companion may attempt to cast a spell with you. As long as the timing is right, you will be able to combine the magic this way as well.

Check Out Mog The Moogle Guide!

How To Combine Magic In Multiplayer

Similar to solo, you may also use the command list to combine your spells or time your attack with your team mates. Use the timer shown on the screen to time your attacks.

The game has an online feature that enables you to connect with other players and explore dungeons together. You can create or join player rooms, follow users and add them as friends.