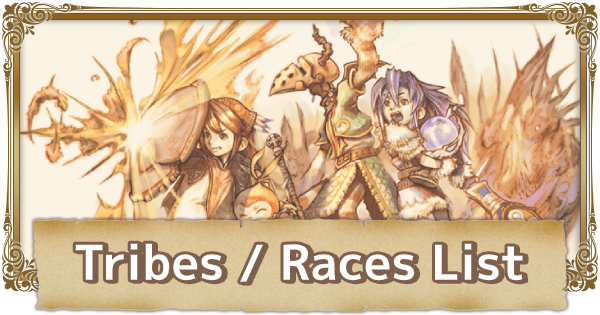 Check Out The Beginner Tips Here

Which Is The Best Tribe / Race?

We recommend you to play Clavat or Lilty as your first character (Main Character) due to their versatility in early game. If you may also consider Selkie if you are confident on your action skills.

Click Here For Best Weapons & Armor For All Tribes

Yuke Not Recommended For Beginners

Due to you requiring to manually finding Magicite per dungeon, Yuke will relatively have a hard time in early game. Until they acquire Magicite Rings in mid-game, beginners may have trouble utilizing this tribe.

Create Side Characters To Use All 4 Races

You may create up to 8 characters per save. You will also require 4 different Family Trades to acquire the best gears, meaning you will have multiple side characters of your own. You won't need to overthink too much on your Tribe selection.。

Check Out The Family Trade Guide

Which Race Did You Choose First?

Choose One For Your Favorite Mimic

In Final Fantasy Crystal Chronicles Remastered, players can use "Mimics" to change their characters' appearance to those of previous FFCC games. These Mimics of old FFCC characters are currently available as paid DLC.

Following information are based on FFCC released on Game Cube. The information on retail FFCC Remastered may differ.

There may be minor performance differences between genders for certain races. The Clavat and Selkie have minor difference in swing speed and attack motions.

The most notable difference is the normal melee speed of Clavat. The male have formidable stats according to these values. The female, although slower, also has a fairly balanced stats compared to other tribes.

Also, attack motions are different between genders. Both male Clavat and Selkie have a jumping motion in their attacks, allowing them to hit flying enemies easier.

Characters are not just skin changes. They also include voice lines that will match the character as you battle your way through dungeons!

Clavats are a kind hearted tribe that treasures harmony with nature and all living things in this world. They are known to be talented guardian of the caravans.

All Rounder With Focus On Magic

Clavats are well rounded in both defense and offense. Male has faster attack speed & are great for beginners. When geared properly, they will be best of both worlds between melee build Lilty & magic build Yuke.

The Focus Attacks however may fall shorter in charge speed & reach compared to Lilty or Selkie. You will need to time your usage.

A proud warrior tribe known to rule the land with an iron fist long ago. Although hot tempered, they are known to be open minded, and trustful. They wield a huge spear compared to their small structure to overpower monsters.

Both normal attacks & Focus Attacks have great range and damage, making them great choice for early game. They will be the ideal melee attacker when geared properly.

However, they fall behind all other tribes in terms of Magic damage and Cast Time. They are weaker units such as flying enemies, that are hard to hit with melees.

Yuke is a tribe of magic users whom had opposed Lilty during their ancient rule. They strive to be a scholar to this day, and use their magic to help those in need. Their magic will no doubt be a valuable asset in the caravan.

Yuke's magic capability surpasses all other race in terms of damage, range and cast time. Their defend can also nullify all incoming attacks.

On the flip side, their melee attacks are very stumpy, and Focus Attacks hard to handle. Their trademark Magic will require you to find a Magicite during early game. Not recommended for beginners.

As careless as the wind, the Selkies are not bound by rules but live for their own interest. Being quick on their feet, many Selkies may turn to the life of bandits to utilize their skills.

All Rounder With Focus On Melee

Similar to Clavat, the Selkies are very well rounded but are catering more on their melee attacks. Their Focus Attack charge speed and reach are especially notable.

Although it has a short i-frame, the defend action is relatively hard to utilize. Recommended for players focusing on dodging and weaving attacks from mid-range.

Following information are based on FFCC released on Game Cube. The information on retail FFCC Remastered may differ.

The base stats will be further amped with equipments and artifacts. The initial value shows the strength & weakness of all tribes.

Yuke will be invulnerable during defend, and nullifies all incoming damage. Selkie, although takes getting used to, have i-frame during their back flip.

Male Clavat has the best value out of all, and other tribes have almost the same speed across all genders. This game does not require split second reflex, you may choose any gender you prefer, unless looking to min-max your character.

This chart shows the Cast Time difference based on Yuke's default cast speed as the standard. In terms of cast speed, Yuke is the fastest, followed by Clavat, Selkie and Lilty.

Compared to Selkie and Lilty, Clavat and Yuke has the longer range in magic. As shown, Yuke has the highest magic related stats out of all races.

Has the female clavat any advantage?