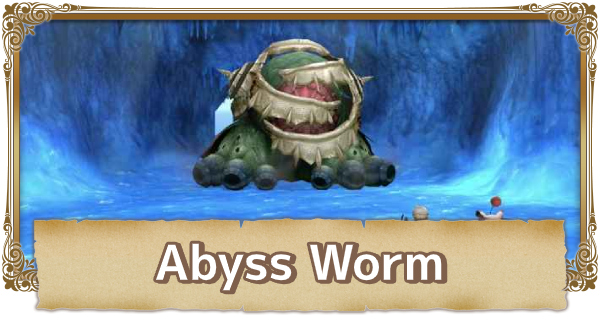 The Abyss Worm appears at the end of the Pale Cave dungeon as the boss of this area during this High Difficulty Dungeon.

Use Blizzard To Kill Minions

The Abyss Worm will be accompanied by several Jellyfish minions. These minions are weak against Blizzard and other Frost spells.

If you use melee to attack the jellies, you will also be electrocuted in retaliation. You may negate this effect Thunder Resistance +2 or above. Also, tuning the Crystal Chalice to Wind will provide +1 Thunder Resistance. Be sure to come to this dungeon prepared.

Attack When Abyss Worm Sucks You In

The Abyss Worm will sometimes sucks in the air around it to pull you towards its range. The suction itself does not deal any damage, and are great chance to land few shots.

When Abyss Womrs try to suck you in, it does no damage. If you've dealt with the jellyfish then its a perfectly safe time to attack. You have a better chance of triggering this move when you are further away from the Worm.