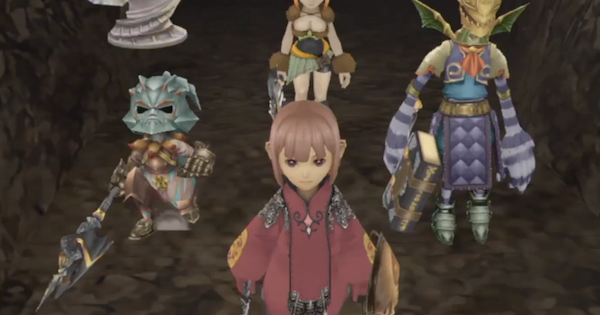 The game has been updated and is now sporting HD graphics, giving it a more modern vibe. This makes it perfect for first-time players and those that want to replay and relive the game with the latest systems.

With the updated graphics come contemporary features like cross-platform play. Players can connect and do quests with friends or strangers on different devices.

Have multiple copies of FFCC Remastered? Well, you're in luck as the game also supports cross-platform play. With this, you can play the game using a smart phone when on the go, and then play it on a larger screen at home!

The game's original composer, Kumi Tanioka, is expected to return to create remixes of the game's classic tunes.

Players can take on the appearance of characters that appeared in previous games with Mimics. These characters are fully voiced and only appear in combat.

Get Mimics In-game Or Via DLC

Mimics can be acquired in-game through Memory Crystals that can be obtained from high-difficulty dungeons. Other Mimics can be had by purchasing them as DLC.

Check Out The Mimic Guide Here

The game also gets an update with new weapons and armor available for your party to wear. It is possible that these new equipment can be acquired via the new quests and missions.

Aside from new armors and weapons, the game also introduces a total of 8 customization options for your characters. It can be assumed that these 8 new options are divided among the 4 races, with each one getting 2 for both genders.

New dungeons together with challenging bosses absent from the original can be encountered in the game. They may appear as optional quests that are sure to test the player's party, rewarding the skilled with rare equipment.

The game is now livelier with characters being fully-voiced. Each character has lines whether they be in combat or in mundane chatters.

Aside from remixes and improvements of the old but gold songs, new songs and BGMs are also expected to arrive with the remastered version of the game.