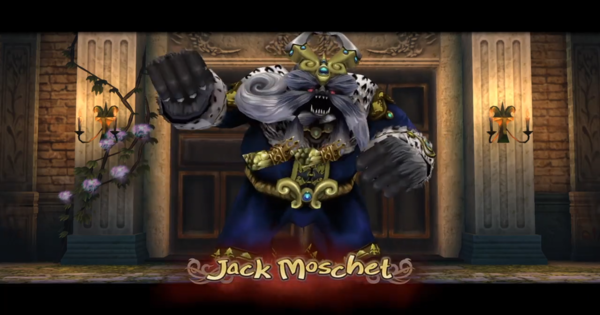 The Jack Moschet appears at the end of the Dinner Party dungeon as the boss of this area during this High Difficulty Dungeon.

Jack Moschet will bring in Tonberry Chef as mobs to assist him. Though Tonberry Chef are slow to move & attack, they are invincible and cannot be damaged. They can however catch you off guard when evading the boss's attacks, so keep your eyes open.

Maggie joins The Fight At 50% HP

When Jack Moschet reaches 50% HP or lower, Maggie will appear and joins him in the fight. She will then start using many attack spells in a frenzy, so focus on evading instead of being the offensive.

Maggie May Not Retreat

Based on our testing, Maggie never retreated in this High Difficulty Dungeon. It may be safe to assume that unlike in the vanilla dungeon, Maggie will not retreat, so just focus fire on Jack Moschet.

Evade When A Curse Maker Appears

Maggie will try to curse the players, which will reduce the afflicted player's stats by half if hit. This is a very dangerous spell, so run away if you see the curse marker on the ground. If you were hit, Use Clear to get rid of it ASAP.

Check out all All Magic Combination & Spell Fusion here!

Engage Jack Moschet From The Sides

Jack Moschet's attack patterns are pretty straight forward and most of which can be evaded by not standing in front of him. As he will use his left arm to attack, move around clockwise to avoid most of his strikes.

Run Away When He Jump Attacks

Once in a while Jack Moschet will use the jump attack to deal AOE damage around the impact zone. Run away if you see him jump.

Wait For His Breath Attack if Using Ranged Attacks

If you're using primarily ranged spell attacks, pay attention to Jack Moschet's breath attacks as it leaves him exposed after casting. To trigger his breath attack, maintain non-melee distance.