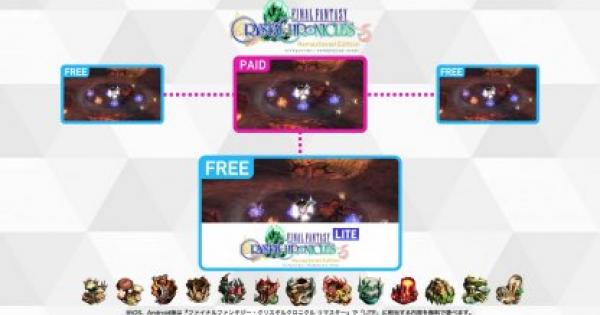 Demo And Full Game Release On The Same Day

Only The First 3 Dungeons Available

Final Fantasy Crystal Chronicles Remastered Lite will allow players to progress up until the first year (meaning, the first 3 dungeons) for free.

Up To 13 Dungeons When Playing With A Full-Game User

If you play with someone who has purchased the full version of the game as a host in online multiplayer, you'll be able to experience up to the first 13 dungeons of the game. This seems to be the reason why the Demo is releasing at this time.

Thankfully, it looks like Demo version players will not only be able to play online, but also have access to crossplay. Switch, PS4, Mobile (iOS/Android) users will all be able to play together and enjoy a FFCC experience without borders! We hope everyone will take advantage of this great opportunity.

Demo Data Can Be Carried Over

Save data accumulated during your Demo play can be carried over to the full version. If you try out the demo and like it, you can keep continue along with the same file after purchasing the game as well!