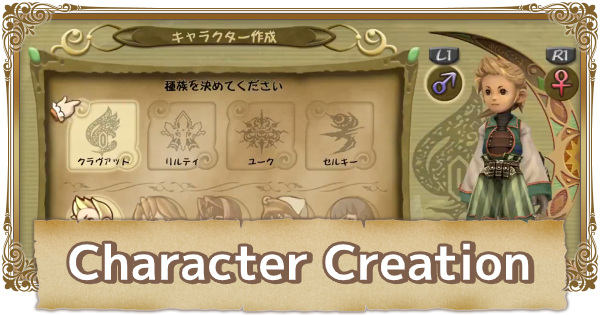 Character Creation - How To Customize Character

Before you get to choose your Tribe and character's looks & gender, you'll get cards on each of the Tribe's strengths & weaknesses. Make sure to read each one to know what best suits your gameplay style.

After reading through the overviews, you'll be presented with the character creation procedure. You get to choose between 4 Tribes - Clavat, Lilty, Yuke, and Selkie.

After choosing your Tribe, you'll be able to choose your character's gender and looks. You can choose between male/female and 5 separate looks for each Tribe.

When you're finally done with customizing your character's looks, you can choose your Family Trade. There are 8 types - Alchemist, Blacksmith, Farmer, Fisherman, Merchant, Miller, Rancher, and Tailor.

It's important to note that your character's Tribe, looks & gender, and Family Trade cannot be changed once you've chosen them. These choices will affect your gameplay.

Check Out Points Of No Return Here!