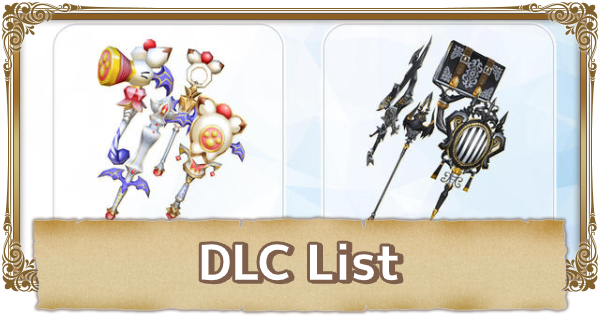 Check out all of the DLC and their contents in Final Fantasy Crystal Chronicles Remastered (FFCC). This includes how to buy & receive DLC item, release, Mimic, Weapons, & more!

How To Buy & Get DLC Items

How to Purchase DLC

Visit the FFCC store page in PlayStation Store, click on the "additional content" tab on the bottom right hand side. This will show the DLC list that you may purchase.

How To Receive DLC Items

You may need to restart the game application if the game is running while purchasing the additional DLC. It is advised you reboot the app just to be sure.

You may pick up your DLC items by visiting your Village (Hometown) and talking to the Moogle handling item storage.

3. Swapping To Other Tribes for Weapon DLC

You may pick up the appropriate Weapon DLC when selecting each applicable Tribes. You will need to talk again with the Moogle again when playing as alternate character.

Can Be Bought Per Character Or Bundle

You can opt to buy per character or get them all in a bundle. If you only want one character, we suggest to buy them solo instead of getting the bundle.

Take on the look of previous FFCC Characters with the Mimic DLC! This includes characters from Rings of Fates to Crystal Bearers.

Not just a cosmetic change, the Mimic DLC will also give your characters voice lines from that of the previous games.

Mimics can only be used on specific characters. You can't use a Mimic on a character with a different tribe and gender. They need to be a match to be used.

DLC includes the following Moogle Weapon Pack and Relic Weapon Pack. Has a small discount compared to purchasing each separately.

Includes A Weapon Per Tribes

Each tribe will receive their own weapon from this set. Since it is a bundle, you cannot choose only the weapons that you want. All of them will be added to your game.

An accessory that slightly increases your recovery speed. Can be equipped by all tribes.

An accessory that lets you pick up slightly more gil. Can be equipped by all tribes.