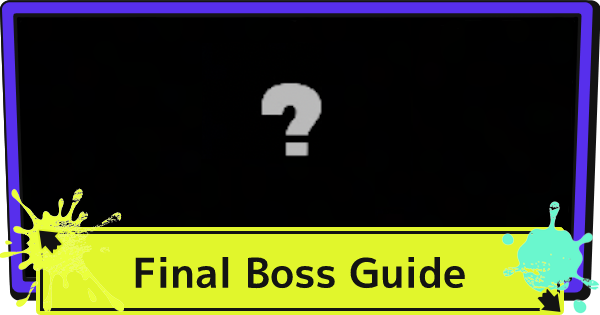 The guide of the Boss at Final Site of Hero Mode in Splatoon 3. Includes how to defeat the last boss, the attack patterns and how to rechallenge.

*Spoiler alert! It includes the information about the Final Boss!

The Rewards for Defeating the Last Boss

How to Defeat & Attack Patterns in the First Half

Other enemies also appear on the way to the boss. Since it'd be hard to collect the Golden Eggs or attack the Boss while avoiding both the attacks from the boss and the other enemies, make it a priority to deal with the other enemies.

Mr. Grizz will throw the missiles to you. You can easily shoot them down, so be positive to deal with. You can avoid them by hiding behind an obstacle, or by moving away from them as soon as they get close, but you may be sprayed with enemies' ink.

Mr. Grizz throws five slashes towards you by swinging his arm. Be calm and escape from the gaps between the slashes. After the cores of Mr. Grizz's actual body get destroyed twice, he may send slashes in rapid succession at you, but no need to be panic, just avoid them one by one.

Mr. Grizz swings his arm down in front of you. It will be used while his actual body getting attacked, so move away from him once you see the motion of swinging his arms up. Since the range is quite wide, be sure to move away as far as possible.

You can deal with other enemies later

If yo deal with the other enemies, you won't be able to move in time. You have to focus on moving when the rocket rolls, and don't worry about the enemies, they won't chase you.

After releasing a wave, Mr. Grizz will launch a laser in the same range. Move out of range as soon as you see the wave. There's a little time between the wave and the laser, so you can avoid it even by walking.

The same Triple Inkstrike as the Special Weapon. There isn't much time between when the bomb lands and when it explodes, so be ready to avoid it as soon as you hear Mr. Grizz throw a bomb.

How to Defeat & Attack Patterns in the Last Half

If you don't defeat Mr. Grizz within 3 mins and 33 secs, you'll have to start over after a special movie. You don't need Power Eggs to continue, so if you want to watch the movie, you could just wait for the time limit.

A couple of enemies will appear on the ship. You can't proceed without defeating them, so deal with them as soon as they appear.

An attack when the bear's core is being sucked. Move to pass under the armpits after he raises his arms to avoid the attack while staying close.

If you are far from Mr. Grizz, a core will appear between you and him. You need to get close to Mr. Grizz by avoiding through the gaps.

How to Rechallenge After the Completition

You Can Challenge Via The Wooden Bear

When you talk to the wooden bear at Site 1 after completing Hero Mode, an option to challenge the Final Site will appear. There is no special reward, but you can use it when you want to challenge the last boss again.

Where the wooden bear is?

The wooden bear is placed behind the drum next to Agent 1 and Agent 2 at the Squid Sisters Camp of Site 1.

Every Stage Can Be Skipped

After entering each stage, a skip option will appear on the menu. You can skip other stages and only fight the boss again.