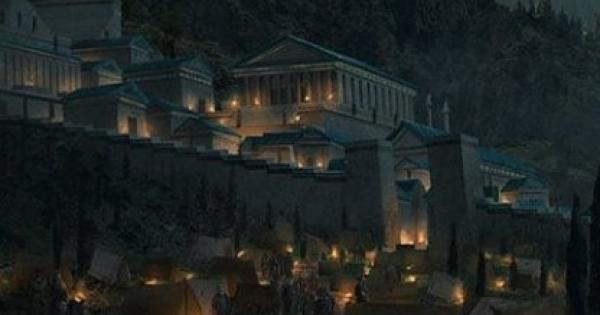 Check out this walkthrough of all the Side Quests available in Phokis in Assassin's Creed Odyssey - including tips, rewards, requirements, and more!!!

The Daughters of Artemis

In this quest, you will be able to the "Artemis's Bow". This bow is powerful enough to accompany you through the entire story arch by upgrading periodically, and is definitely recommended you pick this up early on.

4. Beware of the Sharks Surrounding the Wreck

There will be at least 2 sharks in the water circling the wreckage. You can fight them off or sneak around them to get the treasures.

6. Recruit Gerlon as Part of Your Crew

After you return to Gerlon to give her the bad news, you'll have the option to recruit her to your crew. She's a Rare Lieutenant with an armor boost perk.

The Daughters of Artemis - Walkthrough

2. Use Ikaros to Find the Kalydonian Boar

The Kalydonian Boar's lair is right next to a cliff a few meters away from the Temple of Artemis. Call Ikaros to scout out the area and find its exact location!

3. The Kalydonian Boar Will Summon Other Boars

3. Use Your Bow to Attack the Boar

Create distance between you and the Kalydonian Boar and use your bow against it.as using melee can be risky. Use your bow but don't forget to dodge when they're charging at you.

1. Don't Ask For a Reward from Photios

When Phitios gives you the quest, you will have the option to tell him that your services will be free. Select this option and he will give the Sapphire Linothorax Armor when you complete the quest!

3. Use Oil to Burn Enemies

There are oil jars at the platform on top of where the priests are. Break them open and set the floor on fire with your fire arrows to damage enemies.

The Fort is heavily guarded with the Sapphires somewhere inside of it. Sneak around the top walkway and take out any of the guards you may come into.

4. Scout out the Fort with Ikaros

Find out how many guards are patrolling and where their positions are with Ikaros. You can also check their levels to make sure you will be powerful enough to assassinate them.

Age is Just a Number - Walkthrough

2. Shoot the Deer with Your Bow

Attacking deers with melee weapons can be a bit frustrating as they're quick on their feet and really jumpy. Just use your bow and you'll be able to kill one in one shot.

2. Multiple Wolves Roam the Area of the Herbs

You'll have to take care of the wolves around the area first before you can harvest the Mandrake Herbs. Move around or they'll gang up on you from all sides.

h4:3. The Herbs are Marked by Sparkles

The Herbs can be hard to find within the area since it is filled with foliage.Look around for the sparkling light on the ground to find them.

Sins of the Past - Phokis Quest Walkthrough

Sins of the Past - Walkthrough

2. The Clues are Marked by a Magnifying Glass

The clues are just around the Grandmother's house, one is inside and the other is on the ground on the left of the house. The last clue is the man standing on the right of the house.

2. Take Care of the Guards Around the Farmhouse

There are a few guard around the farmhouse that patrols the area. Take them out to rescue the Grandmother in the middle of the Farmhouse.

If you have a good enough relationship with Lykaon, you can end the quest with a sweet scene between you two. Just make sure to select the dialogue option with the heart!