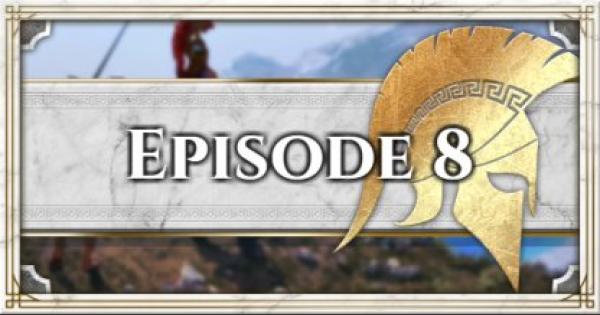 Complete the main quest of Assassin's Creed Odyssey with this guide! Included are walkthrough, guide, tips, and more for Episode 8!!!

In this chapter, "Doing Time" is the only quest that involves combat. Most of this quest involves cutscenes & story-based dialogue.

You'll be in close quarter combat with the two soldiers in your prison cell. Remember to dodge to avoid damage & to open up space for a counter-attack.

2. Talk With Sokrates About Taking Down Kleon

This quest is more story-based and has no combat. Initiate conversation with Sokrates & his group to start working on a plan to bring down Kleon.

You'll have to do some infiltrating again in "A-Musing Tale" and "Unearthing the Truth". Afterwards, you'll head into battle with Brasidas in Amphipolis.

5. Choice: Choose How To Deal With Andras

You can choose to threaten or bribe the drinking men around Thespis to get them out of your way. Choose whichever option you see fit.

You can find your target in an Athenian camp within the city. Use assassin skills to ambush & eliminate Rhexenor quickly - to avoid alerting the other guards in the camp.

It's easier to just sneak around & look for the clues in Kleon's home. This will let you go to the next step of the quest much faster.

Story-Based Quest With No Combat

This quest basically has you talking to Sokrates and his men to move your plans forward in eliminating Kleon. No fights are involved.

In Conquest Battles, it's best to go after enemy captains & heroes as defeating them significantly lowers the enemy's war power.