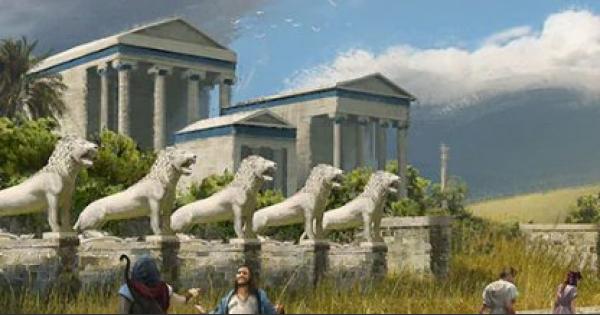 Check out this walkthrough of all the Silver Islands Side Quests available Assassin's Creed Odyssey - including tips, rewards, requirements, & more!!!

In this Side Quest, you will need to sail out on your ship to a combat. Be sure to upgrade your ship thoroughly before engaging in naval combat in this mission.

A Call to Arms Reward

A Call to Arms - Walkthrough

Do not Complete This Side Quest First

Completing Call to Arms will lock out all the Kyra's side quests and Thalates' side quests.. Do not do this side quest first if you want to complete the quest line.

Bring down the enemy army's power by taking down their captains first. You can find easily as they're marked with a golden border and crown on their level indicators.

Check Out the Conquest Battle Guide

Diokles is a special boss in the conquest fight and will appear in the middle of the fight. He's tough and his double mace packs quite a punch so make sure to time your dodges then retaliate!

When you have an Athenian ship in sight, don't just stick to one attack. Each attack has a cooldown so it's better to alternate between them to do the most damage you can!

2. Ram Ships to Sink Them

The quest will only take into account ships that you have sunk. Don't forget to ram at ships to sink them.

2. Focus on the Commanders

No need to take down the whole fort because that would just take too much time and effort. Just kill the commanders and you'll finish the quest.

2. Recruit One of the Commanders for Your Crew

You will have the option to recruit the Athenian Commander Neokles in the Farm of Elais. This is a better option compared to having to fight him.

3. Use Finisher Moves to End the Fight Quicker

Use finisher moves to end the fight quickly. Thaletas is a quick brawler with dual wield swords so be sure to dodge his fast attacks and put distance between you when you heal.

2. Look for the Magnifying Glass for the Clues

Interact with the box and skeleton on the floor, the letter on the table, and the dolls on the house's second floor to complete the quest.

Better to sneak in than have to fight the guards around the area. Scale the walls to stay hidden and to reach the location of the doll.

4. The Prisoner will Kill Thaletas if You Let Him Go

If you let the Prisoner go, he will return in A Night to Remember to kill Thaletas. During your toast, Thaletas' wine will be poisoned and he will die there.

Completing this Quest Will Lock Out Other Unfinished Quests

Don't complete this quest unless you have all of Thaletas' and Kyra's Quests done. Completing this will lock them out and you won't get a chance to complete them anymore.

3. Use Ikaros to Scout Out the Leader's House

Find out the enemies' positions and which route is the best to take in infiltrating the Leader's house with Ikaros.

Kyra with a Cause Walkthrough

Kyra with a Cause Reward

Kyra with a Cause Walkthrough

Quest Will Be Completed If You Burned the Supplies Already

If you already burned the supplies before accepting this quest, the dialogue will be different and the quest will be completed at the end of your conversation with Kyra.

3. Stealth Kill Enemies to Clear the Way to the Chest

Sneak around the fort and take out any guards patrolling through your path to the Nation's Chest. This will also help your escape as no one will be there to notice you.

A Night to Remember Walkthrough

3. Kyra's Fate Will Be Based on Your Choices

Kyra will either go back to the party or commit suicide depending on your dialogue choices. Choose to be less understanding of her situation and she will jump from the cliff.

Grin and Bear It Walkthrough

3. Start with Bows when Fighting the Bear

Get some cheap shots by using your bow to attack the bear from a distance. Once he comes near you enough, that's the time to switch to melee!

I killed Thaletas, but never got to recruit Neokles. How do I recruit him now? He's stuck in the house on the farm in Delos and I cannot interact.