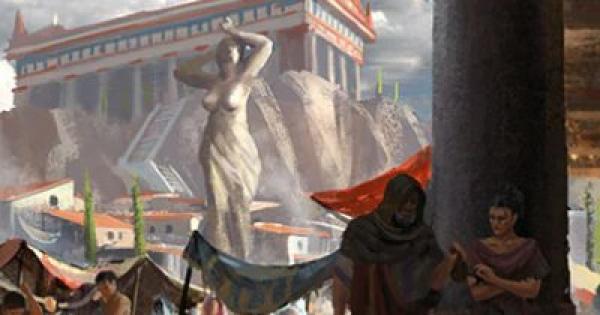 Check out this walkthrough of all the Side Quests available in Kythera Island in Assassin's Creed Odyssey - including tips, rewards, requirements, & more!!!

In this quest, you will face against the Cyclops, one of four mythical being you need to defeat in order to achieve the Atlantis Ending. Defeating the Cyclops will also yield a powerful legendary Heavy Bladed weapon.

4. Move Around so You Won't Get Overpowered

Three enemies will show up after you search for the treasure. Move around the open space and create distance between each enemy so you won't get ganged up on.

A God Among Men - Walkthrough

2. Use Ikaros to Scout Out the Area

Check out what's the best route to take when infiltrating the Murex Fort with Ikaros. Check for enemies and their location, as well as where Empedokles will be.

Run Up to the Greek Brute and Assassinate Him

No need to get into a fair fight. You can just walk over to the Greek Brute and assassinate him, leaving you to deal with his guard which is a fairly easy fight.

A Boss Fight Awaits at the End of the Mission

After opening the gate, you will enter into a boss fight with the cyclops, Bronter! His attacks include charging into you, a long distance shockwave, and bringing down rocks at you.

Check Out How to Get The Atlantis Ending

Best to Use Your Bow Against Bronter

Bronter is pretty slow and it takes him a while to catch up to you. Use your bow to chip off his health little by little and just dodge any of of his long distance attacks.

Be Careful or You Might Hit the Town Guards

2. When attacking, make sure that your attacks will only hit the bandits. Hitting any of the guard who join the fight will cause them to attack you, increasing the number of your enemies.

Beware of the 2 Dual-Wielding Enemies

Both of them are agile and can easily stun lock you if you're not careful. Create distance between you and them and dodge whenever you see them charging their attacks.

Use Ikaros to learn about the number of enemies and their positions in the Mycanaean Ruins. You can also see any items of interest in the ruins with Ikaros.

Save yourself from the headache of taking on close to a dozen enemies by moving around stealthily and taking out enemies quietly. Use bushes and other covers to remain hidden.

All Bonds Will Break - Walkthrough

All Bonds Will Break Procedure

Kill All The Enemies Before Releasing the Prisoners

The prisoners can be killed by the guards if you release them. Take out all the enemies in the camp first before releasing any of them to ensure their survival.

Make Use of the Environment to Hide

Break enemy line of sight by going behind tents, walls, and other obstacles around the camp. Sticking to the bushes can get you discovered especially if the guards are already on alert.

Keep Your Distance as the Captain has Guards

Don't let yourself be ganged up on by moving across the terrain and shooting them down with Bows. Once one of them is close enough, go melee but quickly switch back if the other catch up.

In A Rush - Kythera Quest Walkthrough

By the Fates - Kythera Quest Walkthrough

By The Fates - Walkthrough

3. Search End to End of the Warehouse

The 3 clues are in the middle of it, at the left end behind some fabrics, and at the right end behind another pile of fabric. Look for the magnifying glass to investigate them.

Make it easier to take down the Leader by doing actions that will bring down his power. Go to forts, burn down war supplies, and kill elite soldiers to lower his power!

2. Roll to Get Rid of Lynx at Your Back

Lynx has an attack where they will attach to your back and damage you. Get them off by doing a full roll or they'll keep taking a chunk of your health!