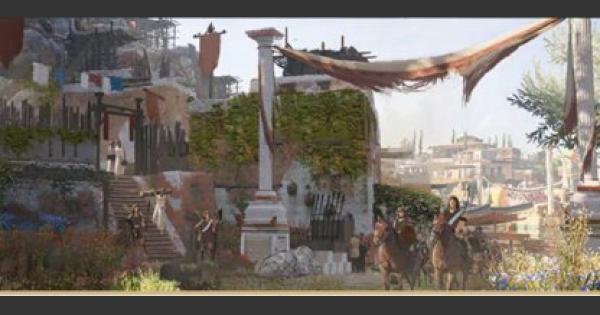 Check out this walkthrough of all the Side Quests in the Petrified Islands available in Assassin's Creed Odyssey - including tips, rewards, requirements, and more!!!

In Writhing Dead, you will have to fight the mythical monster, Medusa. She's a challenge to beat, but if you rise to the challenge, you'll get a powerful sword and a Medusa Figurehead for your ship.

Shadow of the Serpents Reward

Shadow of the Serpents - Walkthrough

2. Kick The Guards Off the Ledge

Easily get rid of some of the guards by lining up your Spartan Kick and kicking them off the ledge. If the fall damage doesn't kill them, it will get them off the fight for a bit at least.

2. Try Not to Hit Civilians

Hitting any of the mob around you will turn them hostile and attack you, adding more enemies to the fight. Try to keep your distance from them and maneuver around to keep from hitting them.

This quest is pretty straight forward. You just have to follow through forest and up to the Petrified Temple to complete the quest.

Heavy is a Spear - Walkthrough

Heavy is a Spear Quest Reward

Heavy is a Spear - Walkthrough

3. Use Finisher Moves on Zetes the Retired

Zete is not any different from any mercenary so just take them out with the same strategies as other mercenaries. Use finisher moves to take a huge chunk of his health in a snap.

2. Sneak or Take Care of the Guards

There will be a few guards on patrol near the caves. You can either take care of them or sneak in, just make sure not be seen or the whole Village will be after you.

At least 1 Bear will be in each cave. Remember to dodge their attacks before attacking as each swipe of their paw does a lot of damage.

3. Loot the Chests in All the Caves

The Gorgon Disk can be found in the last cave's chest. Make sure to loot all the chests in each cave to progress the quest forward.

The Quest is Complete After Talking to Bryce

There's nothing much to this quest. Talk to Bryce in the Petrified Temple and this quest along with the A Slithery Plea Quest will be completed.

2. There are Snakes Around the Temple

It's dark in the temple and it can be easy to miss the snakes waiting around to strike you. Use your torch to see more clearly. You can also use it as a weapon to set snakes on fire.

After you get to the end of the temple, you will find Medusa waiting for you. She poses a tough challenge to beat as she has minions, a petrifying gaze, a teleport, and even a lightning attack so be prepared for a long battle.

3. Take Out the Minions as Quickly as Possible

Throughout the battle, Medusa will call out minions to fight you while she bubbles herself up. Kill the minions as soon as possible to break Medusa's bubble and be able to damage her again.

3. Being Petrified Will Slow You Down

Medusa won't fully turn you into stone, but it will take a hit on your overall speed. Keep dodging while you're petrified to get rid of it and prevent anything from damaging you.

3. Use Bows and Hide Behind the Stone Pillars

Prevent yourself from being petrified by hiding behind stone pillars. You can also peek behind the pillars with your bow and shoot down Medusa to do damage to her while she's firing her petrifying gaze.

3. Medusa Will Fire 3 Lightning Stikes in a Row

Medusa will fire Lightning Strikes at your whenever she strikes the floor with her sword. Dodge the three strikes then go back to attacking her with your bow.