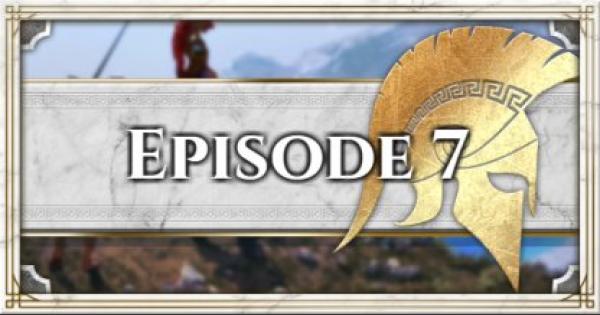 Complete the main quest of Assassin's Creed Odyssey with this guide! Included are walkthrough, guide, tips, and more for Episode 7!!!

Home Is Where My Mother Is

The Cult and the Archon

In this chapter, you'll finally be reunited with Myrrine, your mother but you'll have to combat some enemies before you get to sit down & catch up.

There is only one fight in this quest involving Athenian soldiers on the beach. Take them out with assassination or use your warrior skills to defeat them.

1. Catch Up With Myrrine In This Story-Based Quest

Get the story straight from the horse's mouth. You simply need to follow Myrrine around the island to finish the quest.

After catching up with Myrrine, you'll trigger new quests that you can complete in no specific order. You need to accomplish these before you can move on with the story.

Myrrine will have you complete some Support Quests before you can convince her to go after the Cult with you. You'll also have a series of naval battles in "The Paros Blockade" & "United Front".

3. Climb Mountain To Back Of Quarry To Rescue Euneas

You don't have to confront any solders to rescue Euneas. Simply unlock his cage & escort him away using the mountains in the back of the fort.

There are many fort captains & some war supplies in the quarry where you can rescue Euneas. Make sure to deal with these to lower the Nation Power.

It's easy to steal the Nation Treasure when no one's looking. Go through the back of the fort by climbing the big white mountain to get free entrance to the base.

When you enter the 2nd cavern, the two assassins won't spot you immediately. Use your Rush Assassination skill & chain attack them to kill them both immediately.

2. Aim For The Smaller Boats First

Smaller boats have lower HP but they move fast & can ram your ship. Take them down first then deal with the bigger ships after.

Ram Boats To Sink Them

When you've damage a boat enought, it'll stay still in the water. Ram & cleave into them to sink them instantly.

Chapter 3: Home Is Where My Mother Is

This chapter has no combat involved and is simply dialogue-based.

Helping the Spartan Will Not Affect the Outcome

Choosing whether or whether not to help the young Spattan is completely optional.

Consists Only of Dialogue

This quest will consist only of dialogue. The Two Kings will task you with multiple quests in order to proceed any further. You may choose to complete them in any order.

Chapter 4A: Paint It Red

In this chapter, you'll be facing 4 champions that are very challenging to fight. Make sure that your level is high enough & have good gear before attempting to fight them.Check Out How To Level Up Faster!

You may choose to take down any of the 4 champions you are given mark in any order you choose. Be sure that you are well leveled and equipped for your fight before challenging them, as they can overpower you easily.

Drakon is an exceptionally tough opponent and can take you down in few swipes if under levelled. If you are having trouble taking him down, try using the nearby bush to cut his line of sight and repeatedly deal stealth damage to him.

4A-3: The Fall of Deianeira

Deianeira will be Travelling Around the Map

Deianeira will be travelling around the map on horseback. Intercept her in rural area to take care of her without interference

4A-4: The Last Fight of Aristaios

Nikolaos May Finish the Fight for You

If Nikolaos' life was spared in the previous encounter, he will have already arrived on site and finished off Aristaios for you. If you chose to let him live in the previous episode, you may want to start your hunt of Champions here.

Nesaia will have a bear accompany her in her battle. Be careful you do not get caught in a crossfire.

Chapter 4B: The Cult and the Archon

In this chapter, you'll have to defeat another Cultist - Lagos, the Archon of Arkadia. Use your assassination skills to eliminate him quickly.

You may choose to let Lagos live by completing the support quest "White Lies and Blackmail". If you are looking to finish this section quickly, killing Lagos will be a much more easier & faster.

You'll be participating in the Olympic Games in this chapter. Mastery of combat & warrior skills is a must to complete "The Contender" and "Pankration".

The Oil, even when carefully adjusted, will not have any effect on the scenario due to Testikles meeting his accidental untimely demise.

Use Overpower Attacks to Finish Enemy Off Quickly

You will fight in the Pankration unarmed, and is advised to use Overpower Attacks to deal with your enemies quickly.

Sneak in the building to Retrieve the Antidote

The antidote can be found in the building near the center of the fort. Use the pole above the fort wall to travel above the crowd to avoid attention.

Use Quick Attacks and Overpower Attacks

Similar to your previous Pankration game, use quick swipes to gather your Adrenaline bar and use overpower attacks to deal with your contestant.

In this chapter, you have to eliminate Pausanias in "A Bloody Feast", achieve victory in "The Battle of Pylos" and confront Deimos to determine your game's ending route.

Defeat Pausanias Before He Regroups

You will need to work fast in taking care of Pausanias as your bounty rate will be maxed out upon starting this mission. Track him down fast and end him quickly before the mercenaries catches up on you.

In this confrontation, Deimos will become invulnerable after being guarded in a yellow light. You will not be able to defeat Deimos and cutscene will commence shortly after.

You Can Check Your Ending Route Here

Check on Deimos' reaction once he talks to you in your cell. If he comments to Kleon that "he is not his puppet", you're on track for the best ending.