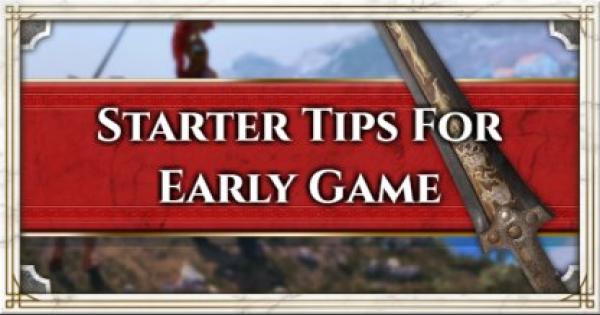 Do not know where to start in Assassin's Creed Odyssey? Check out these starter tips & guide for beginners to know what to do early in the game!!!

Uncover your roots as a descendant of the Legendary Spartan King, Leonidas, and take part in the Peloponnesian War that changed Ancient Greece forever in Assassin's Creed Odyssey!

Play as Alexios or Kassandra

You can chose between playing as Alexios or Kassandra, grandchildren of Leonidas! This is entirely up to your preference as there are no story or skill differences between the two of them.

Check Out the Alexios / Kassandra Overview

Immerse Yourself to the World with Side Quests

Go beyond the Main Quest and interact with the citizens of Greece in Side Missions where you'll get new gear, tons of XP, or even their alliance as rewards.

Check Out the Side Quest Walkthrough Here

Your Choices Have Consequences

In Assassin's Creed Odyssey, all your choices matter and can alter your relations with other characters, quest progression, and even the ending to your journey so make your choices count.

Check Out the Choices Guide Here

There are 9 Endings to Discover

You will get an ending entirely based on your actions in the Main Quest. All in all there are 9 endings with the True Ending has your character reuniting with their family.

You Get Bounty for Committing Crimes

Doing anything illegal like stealing, killing civilians, and attacking factions will get you a bounty on your head. The more crimes you commit, the higher your bounty will be.

High Bounties Will Have Mercenaries Coming After You

Once you get a high enough bounty, Mercenaries will come after you to kill you. These are tough enemies that can easily overpower you and take you down if you're not careful.

Check Out the Mercenaries Guide Here

Pets Will Help You in Your Journey

Phobos is your loyal horse throughout the story and your main transportation in the game. He's impervious to damage, but don't expect him to swim because he will drop you off when in water,

Check Out How to Utilize Phobos Here

Ikaros is your eye in the sky! As an eagle, he can soar above any points of interest and help you do surveillance across areas during your adventures.

Check Out How to Utilize Ikaros Here

Be sure to upgrade your skills when you can afford to. Focus on unlocking active skills that give you powerful attacks to eliminate opponents quickly. You get Ability Points every time you level up!

Check Out How to Level Up Faster Here

Raise your chances of winning battles in early game with these must-have skills!

Sparta Kick is an extremely accessible & useful Tier 1 Warrior Ability. Use it to kick enemies off tops of buildings or cliffs for instant elimination.

The Charged Heavy Attack is a Tier 1 Warrior Ability that is powerful enough to break an enemy's guard or knock them back.

A Tier 1 Assassin Ability, Venomous Attacks coats your weapons with poison that deals damage to foes over time.

Second Wind is a Tier 2 Warrior Ability that lets you heal within a fight using adrenaline. It is extremely effective in sustained combat.

Base your actions on the color of your enemy when they's attacking. Dodge when they're red and glowing and parry when they're white! You can easily counter them with attacks after this.

Don't just face enemies from the front. Move around them and go to their unguarded sides! Dodge and move to their sides where you can start attacking.

Lock On to an Enemy

Locking On will make it easier to single out enemies especially when you're fighting against multiple ones. This will make sure that you're always facing enemies you want to focus on in battle.

Bows and arrows are a great way to take a breather while still throwing aggro against enemies. Put yourself at a distance from enemies and shoot them with your bow to continually chip at their health.

How to Craft Arrows

Craft arrows even in the middle of battle by going to your inventory. Just click on the Arrow's icon and you'll get an option to craft them for 1 Olive Wood.

Utilize Stealth to Take Down Enemies

Going into stealth mode will allow you to take down enemies by Assassinating them, a great strategy for infiltrating areas & forts. Just make sure you won't be seen or your cover will be blown!

Use the Darkness of Nighttime as Cover

Some missions will have you infiltrate enemy camps or bases. You can fast-forward the time until night comes and use the darkness to sneak around & stealthily eliminate opponents.

Use Items Close to Your Level

Get Resources By Dismantling Your Gear

Materials for upgrading are hard to come by. Grey-colored or low-level armor can be dismantled for resources, which can be used for gear upgrades.

Upgrade underleveled Epic & Legendary Items at Blacksmiths to get better stats on par to your level! Don't bother upgrading common items as you can easily find replacements for them.

Check Out How to Upgrade Items Here

Use Complete Sets to Get Armor Bonuses

Completing Armor Sets will net you Armor Bonuses on top of the perks the items already have! You'll get better bonuses the more items from the same set you equip.

Sail the open seas and establish your Naval dominance as the captain of your own ship, "Adrestia." Take note though that you will only unlock the Adrestia when you finish Episode 1 of the Main Quest.

Battle Other Ships in Open Seas

Battle against pirates and take down faction ships in Ship Battles in the game! You'll be able to board ships and steal from them before sinking them to the bottom of the sea.

Take your ship to open seas and discover new locations and islands. Sail across the seas surrounding Greece and find the hidden treasures they hide.

Work as a mercenary and side with either the Spartans or Athenians to establish dominance in certain regions. You'll participate in intense battles for the controlling power of a region!

Check Out How to Win Conquest Battles Here

Attack forts in the area to weaken the power of the Leader. You can locate the forts by the red fort icons they have in the map, along with their reward and goals!