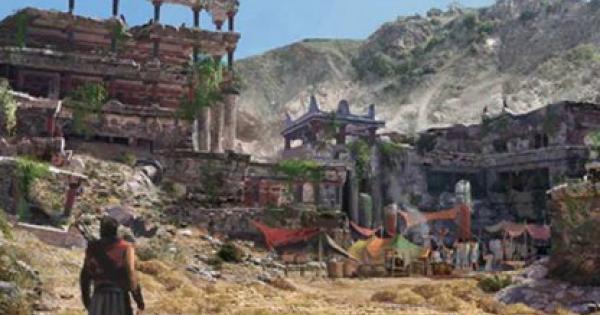 Check out this walkthrough of all the Messara Side Quests available Assassin's Creed Odyssey - including tips, rewards, requirements, and more!!!

This Side Quest will have you confront the Minotaur in an battle. Defeating him will reward you with one of the key item to achieving the Atlantis Ending, along with a powerful legendary weapon.

Be careful where you swing your sword against the guards or you might just hit a civilian and get a mob after you. Use your lock on ability to focus on one enemy during these fights.

Bring the fight to a one-on-one by taking out Diokles' men first. Move around and attack the ones who have separated from the group to take them out of the fight.

Search for Obsidian in Ruins, Temples

You can find stashes of Obsidian in abandoned temples and ruins. The nearest one you can go to are the Temple of Britomartis and the Sunken Ruins!

The Quest will be Completed Quickly

After talking to Ardos at the entrance to the Labyrinth, you will enter a cutscene. Once the cutscene is finished, this quest will be completed.

Of Minotaurs and Men Quest Reward

Of Minotaurs and Men - Walkthrough

Blood in the Water - Walkthrough

Blood in the Water Reward

Blood in the Water Procedure

2. Talking to the Old Man will Activate a Fight

Talking to the Old Man who first gives you a bit of information on Swordfish will have someone threatening him. Kill the Thug, but be careful not to hit any civilians as this will make the people hostile.

At least 3 sharks will be at the entrance to Hermit's Dive. Don't let yourself be cornered by the three of them and use a weapon with a longer range to deal with them.

Swordfish has a special move where he throw a smoke bomb and will appear right next to you when it clears. Dodge and move away as soon as he throws it!

5. Keep an Eye Out for Pirate Ships

As you're sailing back, Pirate Ships may decide to ambush you! Fight them off as much as you could, but if they prove to be too tough, escape them instead of risking your death.

2. Stealth Kill the Bandits in the Cave

There will be a few bandits inside the cave so be wary when coming in. You can easily dispatch them by staying hidden and stealth killing them since they are positioned a bit far from each other.

3. Scout Out the Fort with Ikaros

Check for enemy positions and numbers with Ikaros and create a route for you to take in infiltrating the Fort. You can also check for enemy supplies that you can loot while on the way.

Charging in and alerting of the enemies of your presence will talk a lot of time. Opt for sneaking inside the fort and stealth killing any enemies that you come across with.

This Quest Will End Quickly

The quest will be completed once you finish the cutscene with Ardos. It will also complete the Myths and Monsters Quest.

3. Follow the Thread in the First Part of the Labyrinth

The thread glows faintly so you can see it against the walls and the floor. It will take you directly to Ardos' Father's body.

After you find the corpse, you will be on your own as the thread ends there. You will have to jump across platforms and scale walls to go forward in the Labyrinth and to the Minotaur's Lair.

8. Defeat the Minotaur to Complete the Quest

The Minotaur will be waiting for you at the end of the Labyrinth and it will provide a tough fight. He has a good amount of health so you'll have to work to between attacking him and dodging his attacks.

Check Out How to Get The Atlantis Ending

Prioritize your survival before attacking the Minotaur. When he charges, make sure to dodge and this will give you an opening to counter his attacks with your own.

8. Best to Use Bow and Arrows Against the Minotaur

The Minotaur moves very quickly and has a grab attack if you're in Melee distance. It's best to use bows against him, dodging and circling around while also shooting him down.

Fang For You Buck - Walkthrough

Fang For You Buck Reward

Fang For You Buck Procedure

Complete the Quest Immediately If You Have the Fangs

If you already have the fangs with you when you talk to the vendor, you can immediately sell him the fangs and get Ares's Bow of Slaughter!

Flowers for the Dead - Walkthrough

Flowers for the Dead Reward

Flowers for the Dead Procedure

Find the Flower at the Very Top of Mount Ida

The flowers can be found at the very top of Mount Ida, right next to the fast travel point. Interact with it to pick it up!

Gortyn Out of Hand - Walkthrough

Gortyn Out of Hand Reward

Gortyn Out of Hand Procedure

2. 3. Assassinate From a Distance

Don't bother getting into a fight with the Herald and the Leader's guards. Go up to a vantage point and just kill them with your bow and arrow!

2. Identify the Followers of Ares by their White Masks

The Followers of Ares looks somehow similar to cultist guards because of their white masks. You can find them also wearing black scarves or cloaks!

2. Search for the Followers in Camps/Caves in Zeus's Playground

You can find the followers around Zeus's Playground. You can complete the quest by going to just the Lost Minoan Shrine and the Gerontospilios cave.

Bare It All - Walkthrough

Bare It All Reward

Bare It All Procedure

4. Kill All the Follower to Get the Amulet

You will find the amulet on the body of the last follower you've killed. The amulet will not be looted unless all the Followers are dead.

2. 5. Use an Attack That Can Hit Multiple Enemies

There will be three guards in each house that you have to kill. Take them out faster by using charged attacks that can hit multiple enemies at once!