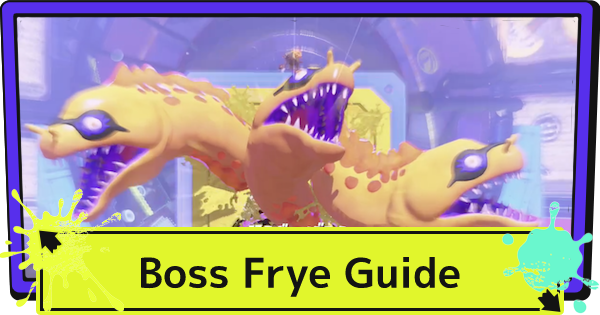 The guide of the Boss Frye at Site 2 of Hero Mode in Splatoon 3. Includes how to defeat Frye and the attack patterns of Frye.

How to Defeat Frye

Bounce off the baby eels to stop them from moving

When you defeat a black-eyed eel thrown by the enemy, it will bounce back to Frye and the box will stop moving. Climb on the stopped box to attack the actual body of Frye. 3 attacks will defeat her.

Climb the box immdiately or you'll have to start over

The box stops with a limited time. If you don't climb on the box and attack Frye immediately, you'll have to start over again from the point where you have to fend off the enemy's attack.

The Attack Patterns of Frye

An attack that summons eels that spit ink bullets. They're easy to deal with by defeating them one at a time.

A giant eel is coming at you in a whirlpool from the boss. When it is passing near the boss, you can safely defeat it from the outside because it won't hit you unless you get close to it. If the circle gets bigger and reaches you, focus on the eel coming toward you and take it down.

Lots of small circles appear on the ground and eels fall down. You can avoid them by moving away from the circle, then defeat the eels stuck in the ground one by one.

A large number of moray eels appear and track you. It's difficult to defeat them with normal shooting alone, so it's safer to use a Special Weapon when they hit you to defeat them all at once.