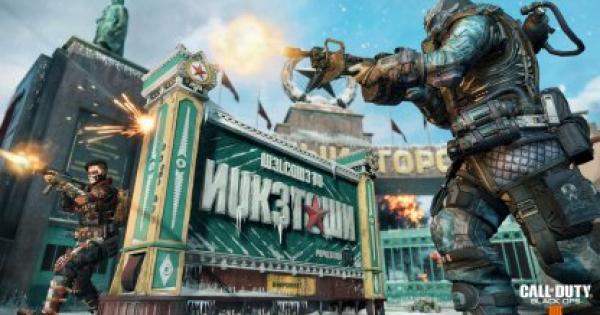 Initial Updates for the PS4

Nuketown and other updates, including a new Knife, has been released for the PS4. Release to other platforms has been scheduled for next week!

A fan-favorite from previous games, Nuketown is now back and updated to fit the modern aesthetics of Black Ops 4! Players can now find Nuketown MP map has in the Nuketown playlist.

Zombies will Appear in Nuketown Island for Blackout

Nuketown Island for Blackout will now spawn Zombies! Additionally, a new Zombie Supply Stash spawn location has been added! It's behind the Nuketown sign.

Take down enemies in one hit with the new Bowie Knife! You can find and use it exclusively Blackout mode.

Daily Tier Skips have been added to Multiplayer and Blackout mode! Players can redeem a Bonus Tier in in the Black Market every day by winning any multiplayer game or getting a merit in blackout.

What Do You Get from Daily Tier Skips?

With the Daily Tier Skip, players can now earn contrabands faster since it renews every day and it only takes one win or merit to get!

Gameplay Balance for All Game Modes

Although most of the gameplay balances are applicable for all game modes in Black Ops IV, there are some that are exclusive to Multiplayer only. Check out the different changes below!

Teams cannot have multiple Strike Teams anymore. Only one Strike Team can be active at a time.

Implement a fix to resolve issues on unwarranted additional round win and blue or red static background when spectating players with certain Optics.

This update will feature a large patch to support the extended stability of Zombies mode! This include fixes to random crashes across IX, Blood of the Dead, Classified, and Voyage of Despair.