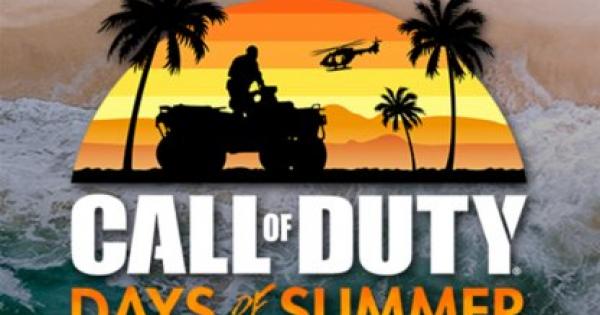 Learn more about the CoD: BO4 Days Of Summer event. Find out the release date & schedule of the event, and confirmed details such as upcoming weapons & more!

#DaysOfSummer is now live on PS4!

What Is Days of Summer?

Days Of Summer is a summer seasonal event for Call of Duty which started with Infinite Warfare, Modern Warfare Remastered and Black Ops 3 in 2017. As with their other seasonal events, this features new items, weapons, cosmetics, new maps & other new game additions.

Second Half Of Operation: Spectre Rising

Days of Summer is our next seasonal game update that kicks off the second half of Operation Spectre Rising. Our fifth Operation is planned to launch in July.

As confirmed by Treyarch, Days of Summer is not a new operation, but rather the second half of the ongoing Operation: Spectre Rising.

As with events and major updates for Black Ops 4, Days Of Summer releases first on PS4. PC and Xbox One players will receive this update the following week.

Series veterans rejoice! Returning from the Black Ops 2, the classic skate park-themed map, "Free Grind" is now available in BO4 as the new Multiplayer map for free to all players.

Everyone's favorite gamemode CTF makes its comeback to Black Ops 4 in this updates featured playlist. Speed and vigilance is the key for victory!

Take part in the all new 50 v. 50 team battle royale mode, the Ground Wars! In this new gamemode, you will be able to find more weapons and loots around the map, setting up for a huge scale scuffle!

Equipped with 2 high calibur turrets, the new Attack Helicopter will decimate your competition while keeping an sharp eye from the sky. Use this new vehicle for fire support, or scanning for new prey!

Now that the water subsided, players will see several parts of the Blackout map changed drastically by the flood. Keep vigilant, you may find surprise around the corner!

New "Labours of Hercules" Gauntlet is now live in “Ancient Evil”. Along with this, you and your squadmates can take on 30 new challenges and leaderboards!

4 fan favorite elixirs; Perkaholic, Near Death Experience, Reign Drops, and Shopping Free return as Epic Elixirs in the laboratory! Along with the new introduction, some rairty changes have been made to existing elixirs.